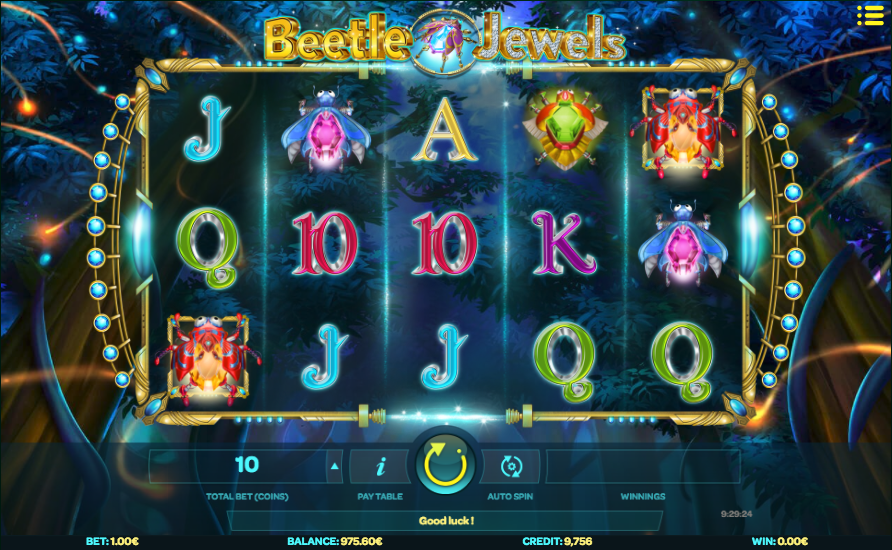 Beetles don’t often appear as magical creatures in stories and fables but perhaps they’ve been a bit undervalued in the past; Beetle Jewels is an online slot looking to remedy that omission, it’s developed by iSoftBet and and you can find out how it works right here.

Beetle Jewels is a five reel slot with three rows and ten fixed paylines; an intricate golden frame inlaid with blue gems borders those reels while the backdrop consists of a wooded scene complete with fireflies trailing lights behind them.

The higher value symbols consist of four multicoloured beetles, the most valuable of which is worth 5000x your line stake; 10, J, Q, K and A represent the lower values.

The wild and the scatter are one and the same symbol and that’s a glowing blue beetle with pretty purple wings; it’s also the only symbol contained in a golden circle.  At least three will activate the bonus while two will act as normal wilds, substituting for all others to help form winning combos.

On each spin a standard symbol will be picked at random and shown above reel three; after that spin all symbols on the reels where that chosen one lands will match it as long as the following rules are met:

Wins will now payout for those symbols even if there are no combos on active paylines.

Once you get to grips with how the feature works, Beetle Jewels is a very enjoyable slot; it has some lovely graphics, a gentle soundtrack and the ability to set up to 1000 autoplays for the laziest among us. It also comes with an RTP of 95.50%.