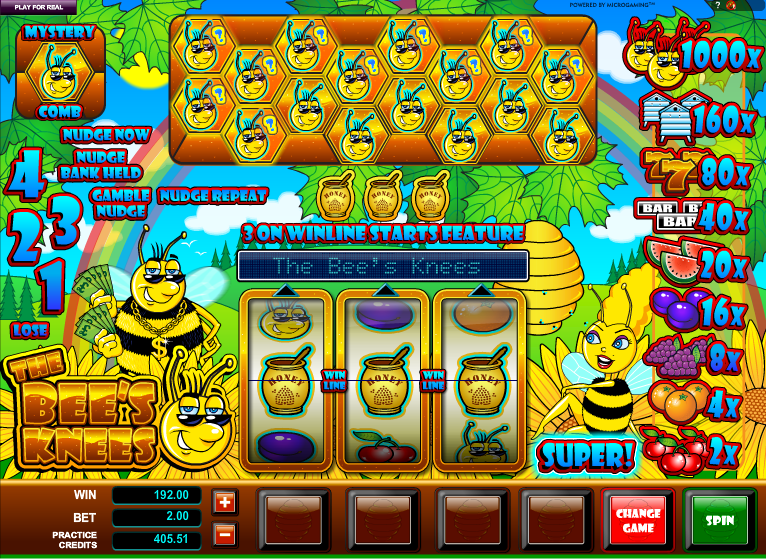 Microgaming seem to have cornered one small section of the online slots market and it’s the genre which combines three reels slots with some unusual bonus features. The Bee’s Knees is one such game and clearly takes it’s inspiration from the UK-style fruit machines with it’s nudges and holds.

The Bee’s Knees looks like the simplest of slots with only three reels and one payline but there’s much more to it than that. It’s all bee-related and there are a bunch of blinded-up bumblebees lounging around the screen waving cash. There are three bee-related symbols – honey pots, hives and bee heads – along with the standard fruit, bars and sevens.

The honey pot is the symbol you’ll need to land on the payline to activate the feature and you will notice that there are two versions of this game, Standard and Super. Super mode will double all wins but cost more per spin.

Take It Or Leave It Bonus

Three honey pots on the payline will trigger this particular feature and it involves the honeycombs above the reels. Initially you will be asked to press the ‘Stop’ button and this will give you a ‘1’, ‘2’ or ‘3’ which will determine the size of your win (three is obviously better). Now each honeycomb square will turn into a multiplier from between 10x – 120x and then the game will remove five. Now you will be offered one of those multipliers; if you refuse it, five more will be removed from the honeycombs and another offered to you. You can continue refusing until there is just one left.

Nudges are randomly awarded and allow you to jog symbols down in the hope of creating a win; holds give you the opportunity to freeze the reels and spin the remaining ones with the same aim. Nudges can repeat or sometimes held over until the next spin.

Randomly, one reel will be held and the other two spun to make a matching combo.

If after nudging, two matching symbols are on the payline, this feature will activate by telling you not to hold anything and just spin the reels for a guaranteed win.

Occasionally one reel will shake and this is a hint that you should hold the reel for a guaranteed win.

A win can be held for one more spin with this feature.

Keep an eye out for what’s written on the little noticeboard above the reels; this is where the Let ’em Spin hint will appear and you don’t want to miss out.

Maybe it’s because we like the old style fruit machines but we always have a soft spot for these slots; nudges and holds are reminiscent of losing £20 to the game in the corner of the pub and going home grumpy.