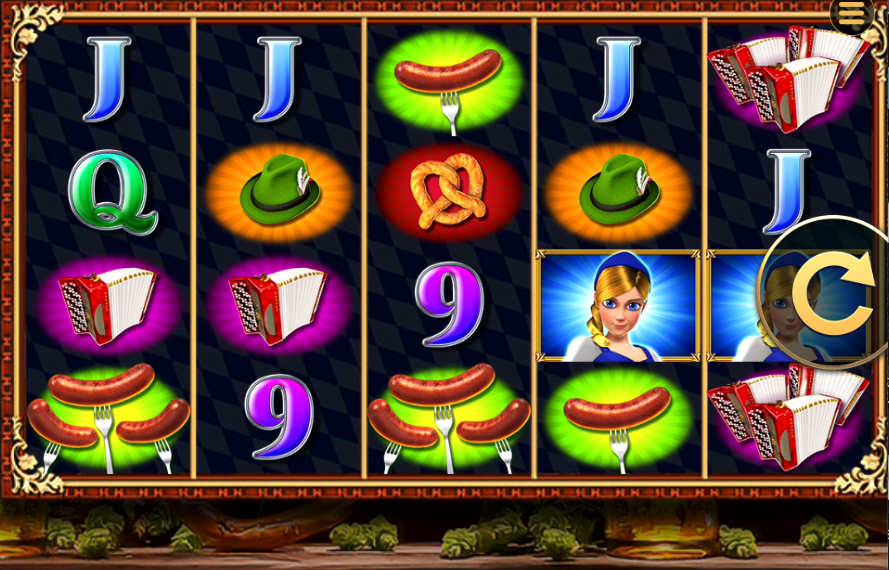 The Germans know how to put on a good beer festival as we’ve already seen in online slots such as Beer Haus and Oktoberfest but here we have Beer Barrel Bash from High5 Games which offers players free spins and locked wilds as well as sausages, ale and squeeze boxes.

Beer Barrel Bash is a five reel slot with four rows and eighty fixed paylines; those reels spin within a neat, teutonic frame under which we can see the remnants of a party.

The high value symbols include the waitress, the squeeze box, the pretzel, the traditional hat and the sausage; 9, J, Q, K and A.

The wild symbols are one, two or three glasses of beer and they’ll increase the number of standard symbols awarded up to a maximum of fifteen on a single payline; the Free Games bottle top is the scatter symbol.

This involves the wild symbol and any one which lands on the reels will lock in place, upgrading to two glasses and then three glasses of beer on subsequent spins. After that they’ll disappear. This is called Lasting Loot.

This is triggered by landing three of the bottle top scatter symbols anywhere on reels two, three and four; you’ll receive just six free spins and unfortunately it’s not possible to retrigger this round or win any extra spins.

The good news is that the Locked Upgrading Wilds are also active during this round so those six spins might prove profitable after all.

If you like High 5 slots and Oktoberfest-themed games then you’ll appreciate this for sure; it might not replace the real thing but it will keep players entertained for a  few spins.