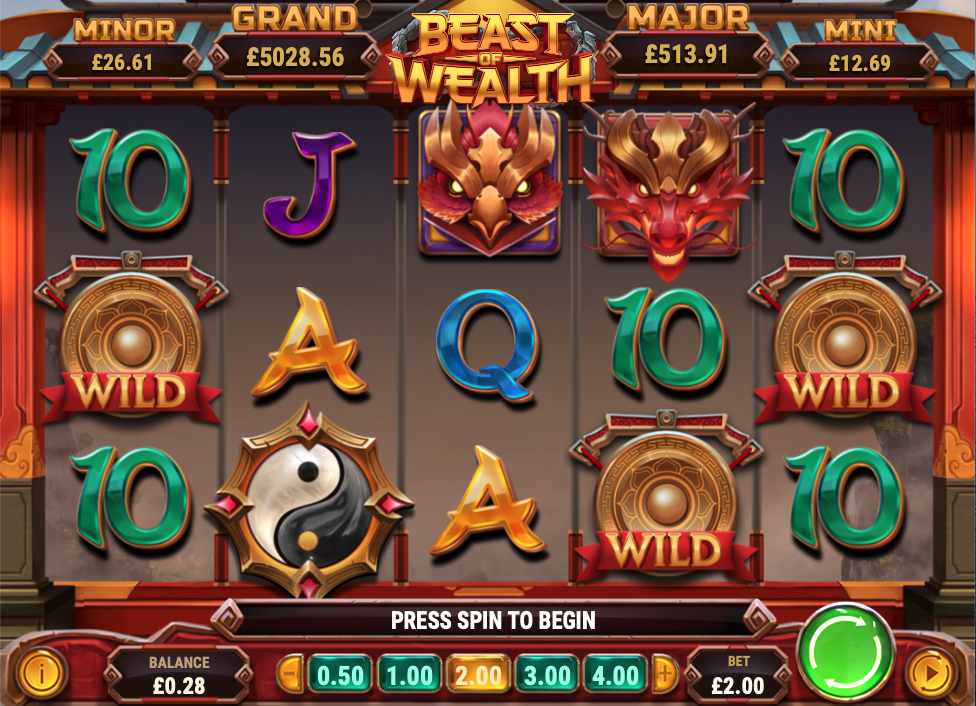 Mythical creatures combine with a dash of Chinese mythology in this online slot from Play N Go; it’s called Beast of Wealth and it tempts players with an enhanced free spins round and four progressive jackpots which can be won on any spin.

Beast of Wealth is a five reel slot with three rows and 243 ways to win which means that combos can be formed as long as there are matching symbols on adjacent reels starting from the left hand side. The reels spin on the side of a traditional Chinese building with mist blowing in from the valleys below.

The four high value symbols are the stylised beasts of the title – tortoise, phoenix, tiger and dragon – while the lower values are represented by 9, 10, J, Q, K and A; the golden gong is wild and it will replace everything except for the Yin Yang scatter to help make winning combos.

Landing at least three of the Yin Yang scatter symbols anywhere in view will award an initial eight free spins but more can won in the same way when the round begins.

Only one beast will appear on the reels during this round and you can select which one; the higher value symbol you pick, the fewer there’ll be as you can see from the pic below.

You can also use the Mystery Pick option if deciding for yourself seems a bit taxing.

During the base game up to five reels may turn gold and if a wild symbol lands on one of those golden reels you’ve won a jackpot prize; you’ll get to select from a group of coins until you’ve found three matching which will determine the size of the jackpot – Mini, Minor, Grand or Major.

Beast Of Wealth is fast-moving and entertaining stuff with a potentially lucrative free spins round and the lure of the progressive jackpot; it’s one of the better virtual trips to China we’ve made recently.