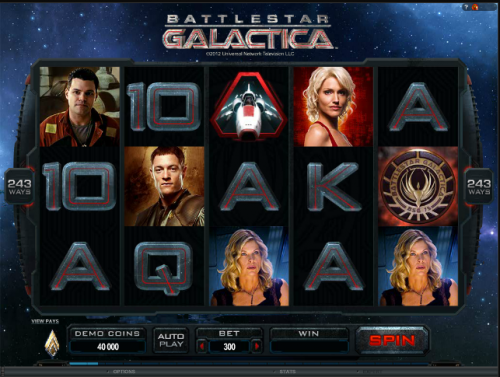 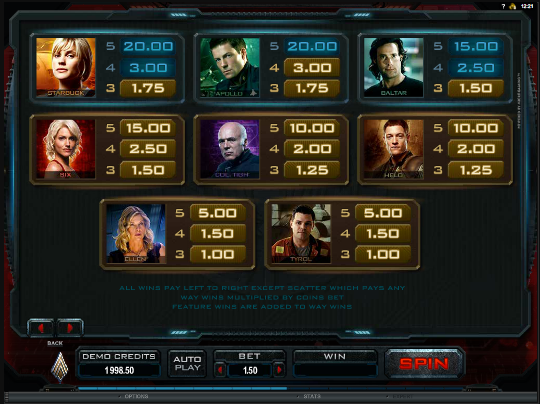 For those more mature members of the slot-playing demographic, Battlestar Galactica brings back memories of the TV show which ran in the late seventies featuring Lorne Greene, Richard Hatch and Dirk Benedict and some wobbly scenery.  This online slot however is based on the rather slicker TV series which ran from 2003 to 2009.

The plots of the two shows differed slightly but that makes no difference to the gaming experience; the characters featured are all from the newer show and the bonus games are just space-related but exciting nevertheless.

The backdrop to the game is of course a space environment but look closely at the bottom of the screen and you’ll see some well-rendered spaceships drifting across the background.  Standard playing card symbols are used for the low value wins but the higher value symbols are represented by photos of eight characters from the television show, a small space craft is the scatter while the Battlestar Galactica logo is the wild symbol.

There are five reels and 243 ways to win, a number made possible by the ability to make winning combos from right to left as well as left to right in certain game modes.  When you press spin the outer reels stop first, then the inner reels and lastly the centre reel.

There are three different game modes, each is activated randomly and they are as follows:

Randomly triggered during normal mode, the Ion Storm turn up to five reels into wilds to increase the chances of landing a winning combo.

Landing the FLT symbol on the centre reel triggers this bonus and all the playing card symbols are removed from the reels.  The FLT will appear in empty slots as any of the main characters but not the wild or scatter symbols.

Landing three, four or five space craft symbols in Normal mode will win you fifteen free spins with a 3x multiplier.  In Fight mode you’ll get five free spins, an extra wild which can turn into a split wild and the chance to be randomly awarded more free spins.

As you play the game you will accrue ranking points (which you can see along the bottom of the screen); as you rank up you gain the ability to view extra video clips.

Battlestar Galactica is not as complicated as it sounds and all the extra features will keep you busy for some time.  You can bet from 30 coins per spin up to 300 for the high rollers and that cash value will differ slightly depending on your currency.