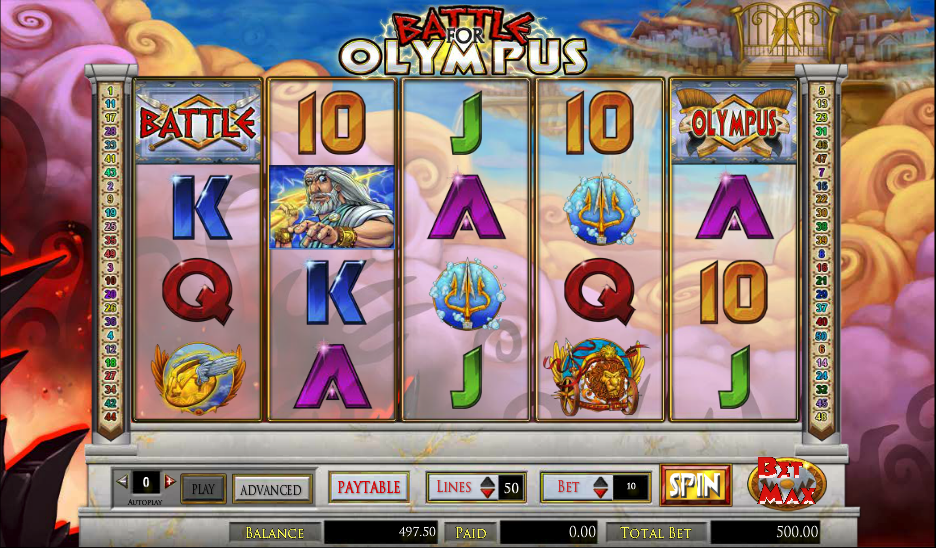 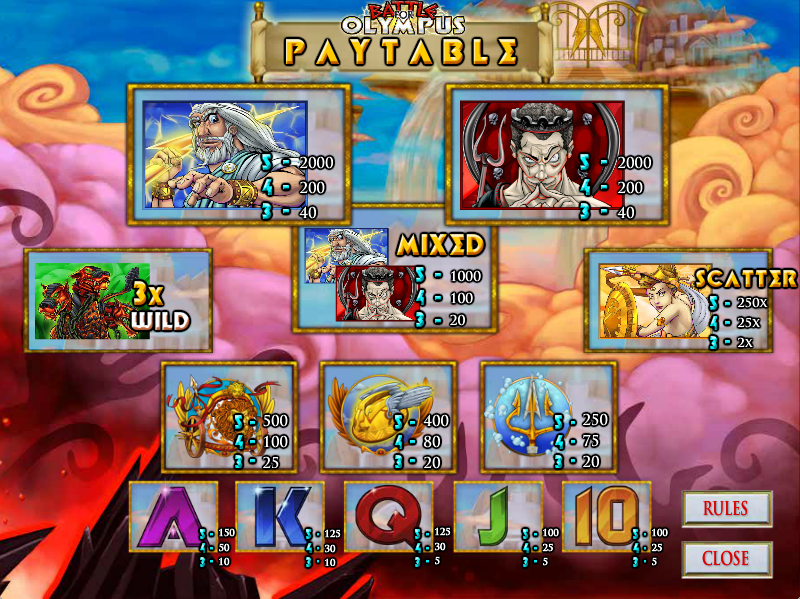 If there’s on thing we aren’t short of in the world of online slots then it’s a game themed on the ancient Greek gods (see out top five by clicking here). There’s nothing wrong with one more though and so here we have Battle For Olympus, a colourful and epic release originally from Cryptologic and now under the giant Amaya Gaming umbrella.

Battle For Olympus is a five reel slot with three rows and up to fifty paylines; through the marble reels we can see the aerial battleground where Hades and Zeus do battle – dark clouds swirl around the gates of Olympus in the distance.

Zeus and Hades are two of the base game symbols along with a chariot, a winged helmet and a trident; 10, J, Q, K and A represent the lower values. Winning combos can be formed by Zeus and Hades mixed on an active payline.

The three-headed Cerberus is the wild symbol and it will multiply by 3x any wins to which it contributes; it substitutes for all other symbols except the scatter which is represented by an unnamed female god with a shield.

On reels one, three and five respectively you will see the ‘Battle’, ‘For’ and ‘Olympus’ scatters icons which activate the main feature.

There’s a rare element of skill in this feature but you’ve got to trigger it first and you do that by landing the Battle, For and Olympus symbols on reels one, three and five.

You now get to select whether you are Hades or Zeus in the upcoming fight after which you will see a setup reminiscent of ‘Streetfighter’. You have five attempts to strike your opponent by stopping the moving slider as close as possible to the centre of the slider. Each hit earns cash and of course the idea is to completely defeat your opponent. Getting four perfect hits will automatically win you the battle. Check the video above to see it in action.

Battle For Olympus is a very charismatic slot which might be a little dated now but it’s good fun nonetheless and well worth a go. The Battle Bonus is not too difficult to trigger and quite satisfying to win.