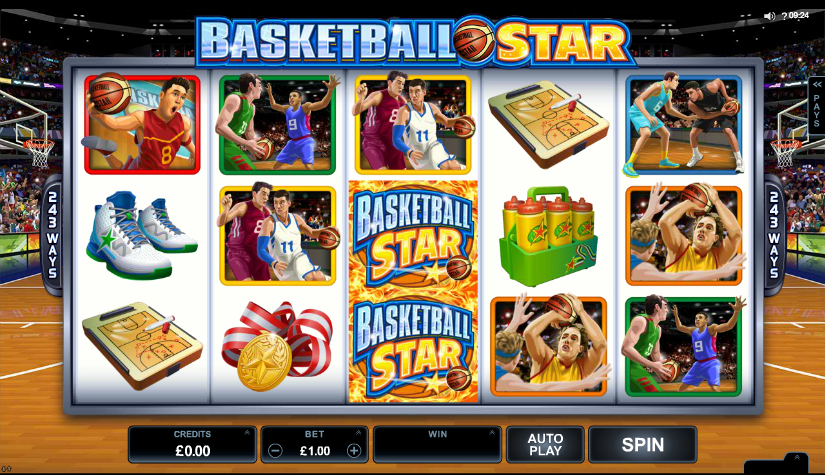 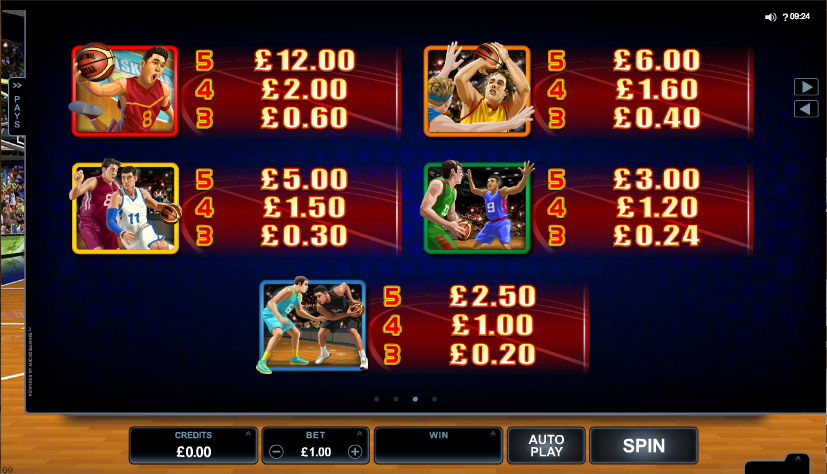 Basketball is not a game we know a great deal about but it’s fast-moving and high-scoring so at least it’s got that going for it. It’s also the theme of this action-packed online slot from Microgaming; it’s called Basketball Star and it comes complete with cheering crowds, Microgaming’s Rolling Reels and a free spins round – all the essential details are below.

Basketball Star is a five reel slot with three rows and 243 ways to win – there’s no standard payline structure, winning combos are formed as long as there are matching symbols on adjacent reels from left to right. The reels spin in front of a vast sports arena which stretches away into the gloomy distance.

All the symbols are related to the theme and include five action shots of basketball players doing their stuff; the remaining five symbols are a gold medal, some water bottles, a pair of trainers and a tactics chart.

The game’s logo is wild and it appears stacked on reels three, four and five, substituting for all others except the scatter icon which is a basketball.

This occurs randomly in the base game only and up to two reels will turn completely wild, offering a guaranteed win.

This is always a favourite of ours and it works like this – every time to you land a winning combo in the base game of free spins, those symbols involved will disappear, allowing more to drop in from above to fill up the spaces. More winning combos can then be formed and this process continues until no more wins can be had.

This is triggered by landing three or more of the basketball scatter symbols anywhere in view for which you will receive the following:

During the spins, each consecutive Rolling Reels win will increase the multiplier as follows – 1x, 2x, 3x, 4x, 5x and then 10x

Basketball offers plenty of enjoyable features and it looks good as well although the design style is recognisably Microgaming. The Rolling Reels keep things interesting and it doesn’t seem to tough to trigger the free spins.