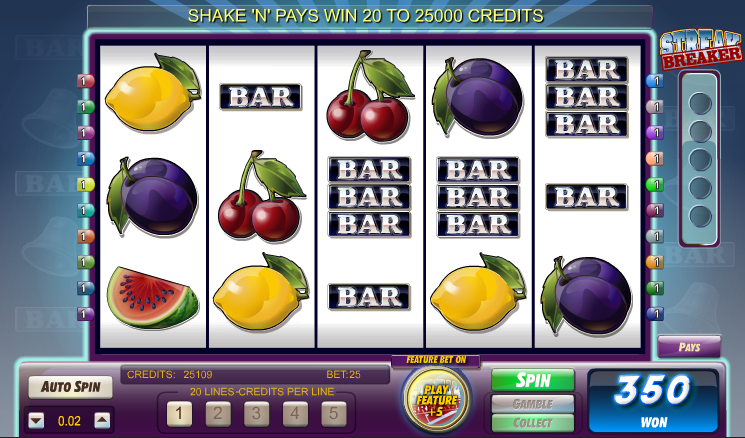 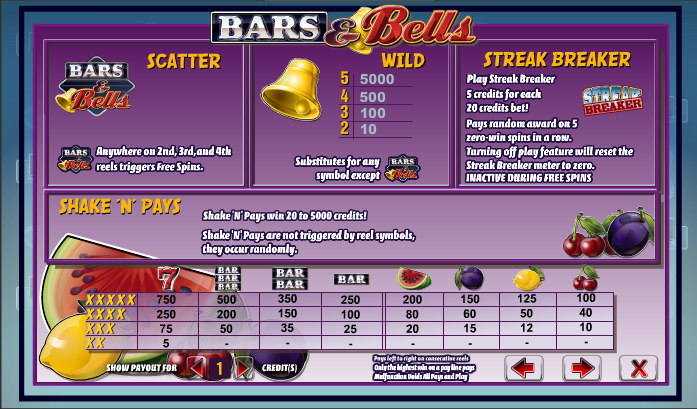 If you’re occasionally hit by a pang of nostalgia towards the slot machines of old then we may just have something here for you; Bars And Bells is neat looking game from Amaya Gaming which is something of a tribute to the classics. It does have a couple of nice bonus features though so there should be something for everyone here.

Bars And Bells is still a five reel slot and it has a healthy twenty paylines. You will see as soon as you load it up though that it looks basic but well-designed and that all the symbols are of the traditional kind. They include cherries, lemons, plums, melons, single, double and triple bars and sevens.

The bell is wild and there’s a Bars And Bells symbols which is the key to the main feature.

This is less of a bonus feature and more of a betting option. If you are willing to an extra five credits on top of the wager total then press the ‘Play Feature’ button and a meter with five spaces will appear on the right hand side of the reels.

With every consecutive non-winning spin one space will fill up and if you manage five in a row you will receive a random award as a sort of consolation prize.

The Bars And Bells logo appears on reels two, three and four and if you can land them anywhere on those reels you will get some free spins.

First of all you must play a game in which you pick from two grids until you reveal three matching numbers of free spins and multipliers. You can see all this in the video below – the lowest award is 5 spins + 2x multiplier and the highest is 20 spins + 3x multiplier. When the number has been determined, the spins will start.

If you’d like to wager your most recent win, just click ‘Gamble’ underneath the reels and you will get to play a 50/50 game in which you must guess which colour the next playing card drawn will be.

Should you play the Streak Breaker? Well it adds a bit more excitement to proceedings and it will mollify you a bit if you manage five spins without a win but in the end the theoretical return to the player will of course remain the same.

This is a really enjoyable game and one of it’s odd idiosyncrasies is that you can get disappointed when you don’t spin five losses in a row, despite the fact that you are losing less by not doing so. It’s all good fun though and there’s lots to keep you entertained.