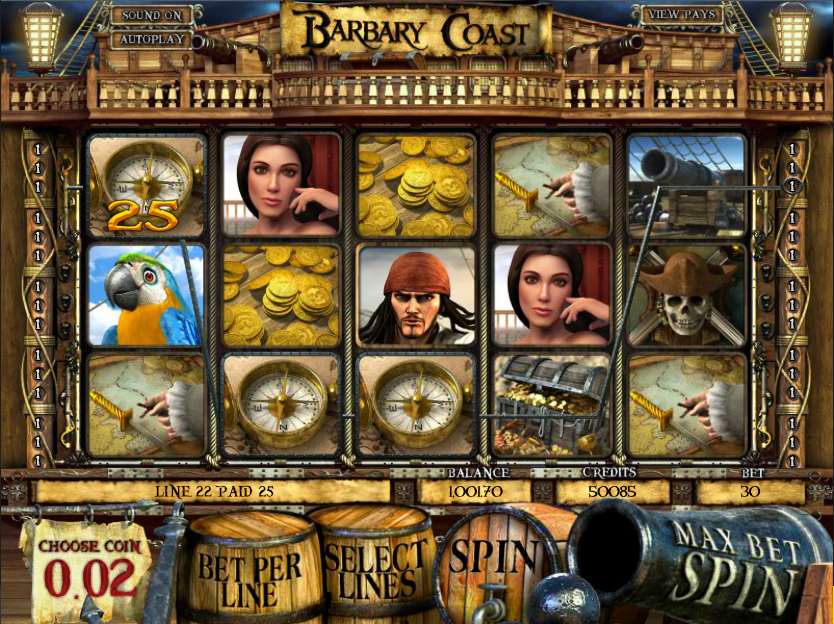 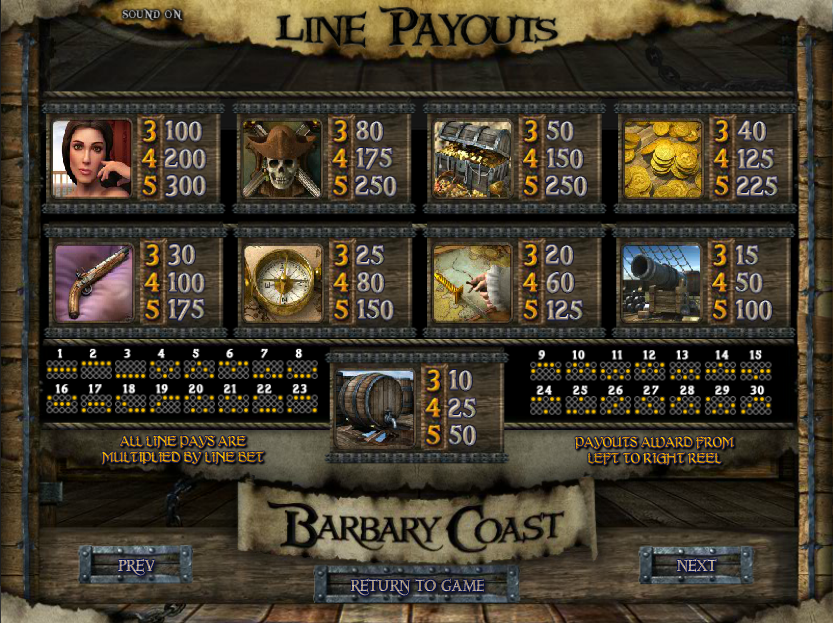 Up until the 19th century the Barbary Coast referred to an area of North West Africa, often frequented by pirates and slave traders. It’s also the name of this pirate-themed online slot from Betsoft Gaming which comes with several bonus features as well as some fruity pirate chat.

Barbary Coast is a five reel slot with three rows and up to thirty paylines; after an entertaining intro movie you will find those reels spinning on part of the pirate ship – there are cannon and gunpowder kegs below the reels and various parts of the superstructure at the top.

There are eight theme-related symbol including the girl, the skull/crossed swords, the treasure chest, gold coins, the pistol, the compass, the map, the rum barrel and the cannon.

There is no wild symbol but there are several bonus symbols including the parrot, the cannon, Ben Sawyer (our hero), Captain Blackbeard and the worker.

This is triggered by landing three or more of the parrot scatter symbols anywhere in view; you will now receive the determined number of free spins but unfortunately you can’t retrigger any more spins or any other feature from here.

When the cannon symbol lands on the centre reel the worker will walk along the bottom of the reels and fire a cannon, turning that reel completely wild for one extra spin.

Trigger this by landing three or more of the Ben Sawyer scatter symbols anywhere in view; just click the symbols in turn and Ben will swing across the reels to collect instant credit prizes.

This is triggered by landing three or more of the Blackbeard symbols on an active payline and initially you will be asked to select the order of three sword fighting moves – slash, parry and thrust. The fight with Blackbeard will now play out and you will receive credits per successful hit and an extra prize if you win the fight and rescue the girl.

This is activated by landing three or more of the worker symbols on an active payline; you now get to play a heads/tails game in which the lower has to drink some grog – the loser is the first player to drink three drinks and you will win money accordingly.

Barbary Coast is another really immersive online slot from Betsoft and it’s well worth checking out; the bonus features seem to get triggered regularly and of course it’s designed to a very high standard.