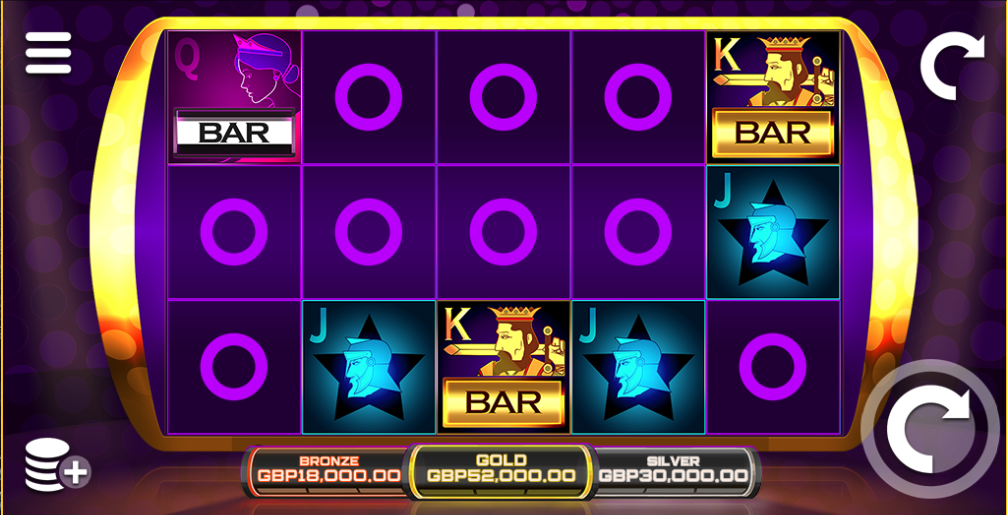 The simple, stylish lines of this online slot machine from Leander Games are immediately obvious as soon as you load it up – it’s called Bar King Deluxe and behind those good looks it offers players free spins and an enormous jackpot prize from £0.10 per spin.

Bar King Deluxe is a five reel slot with three rows and ten fixed paylines; those reels spin on what looks like a golden mobile phone propped on a shiny surface with the three jackpot prizes shown underneath.

There are just three symbols in play here – the blue Jack, the red Queen and the Gold King – the purple circles are blanks and are worth nothing. The Gold King can also act as a will but only for the red Queen. The jester is the scatter symbol.

Landing three of the jester symbols anywhere on reels one, three and five will prompt the player to pick one of the options to determine how many spins are awarded – 5, 10 or 20; more spins can won during this round in the same way.

This is triggered by landing at least three Gold Kings anywhere in view (only one can appear on a reel at any one time though); those Kings will now become safes so click on each one to open it and reveal coloured coins:

If you fail to win one of the jackpots don’t worry because there’s a consolation prize of 5x, 20x or 100x the stake if this feature was triggered with three, four or five Gold Kings respectively.

At the meeting point of style and substance you’ll always find slots like Bar King Deluxe – it’s smooth, modern looks draw you in and the features tempt you to stay for a bit longer. Very entertaining!