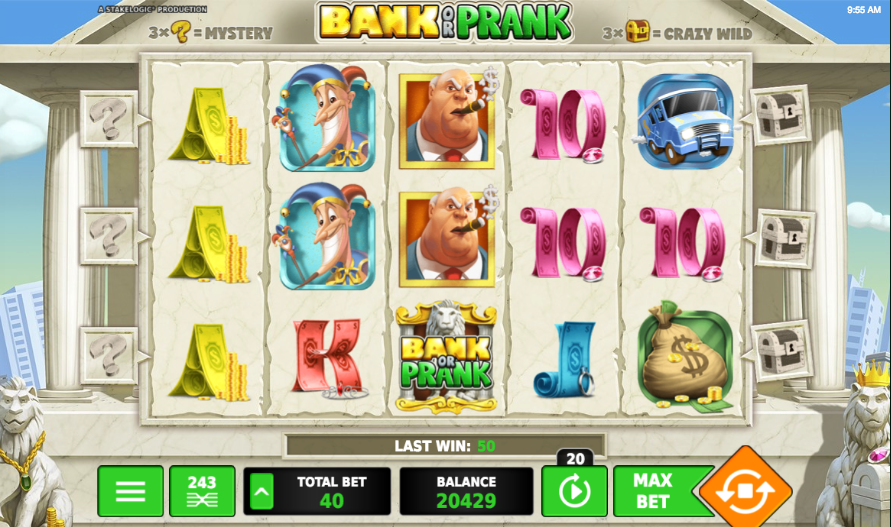 The world of high finance collides with anarchic humour in this online slot machine from Novomatic subsidiary Stakelogic; it’s called Bank or Prank and while it could be a clever pastiche on the state of the global economy, it’s more likely to be nothing of the sort – find out what it’s all about below.

Bank or Prank is a five reel slot with three rows and two hundred and forty three ways to win which means that winning combos are possible as long as there are matching symbols on adjacent reels starting from the left hand side. Those reels spin on the stone-clad entrance to a huge, classically designed bank.

There are plenty of theme-related symbols including the game’s logo, the bank manager, the jester, a security van and a bag of cash; 10, J, Q, K and A make up the lower values and they are formed from combinations of banknotes.

The gold coin is wild, it appears on reels two, three and four and it will replace all others to from winning combos except for the special symbols – the question mark, the treasure chest and the bomb.

The bonus features in Bank or Prank are based on collecting three question marks from reel one or three chests on reels five – they fill up the spaces on either side of the reels but beware a bomb on the same row which will remove one. The following features are then triggered:

Bank or Prank offers plenty of entertainment for the slots player looking for something to pass the time; we always like a game in which the bonus trigger is more or less guaranteed and it occurs here regularly, even if the prizes in the features are not huge. This game comes with an RTP of 95.78%.