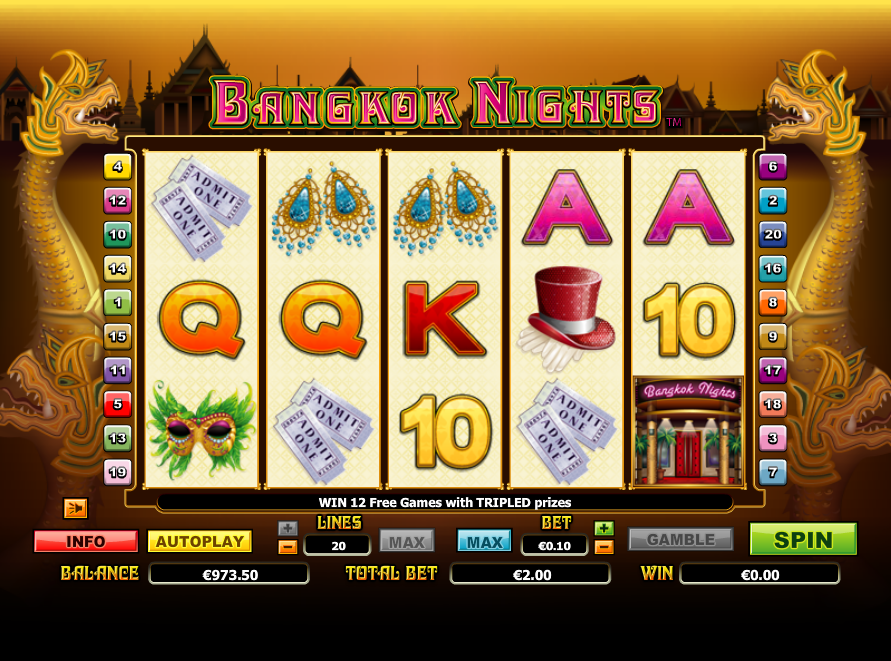 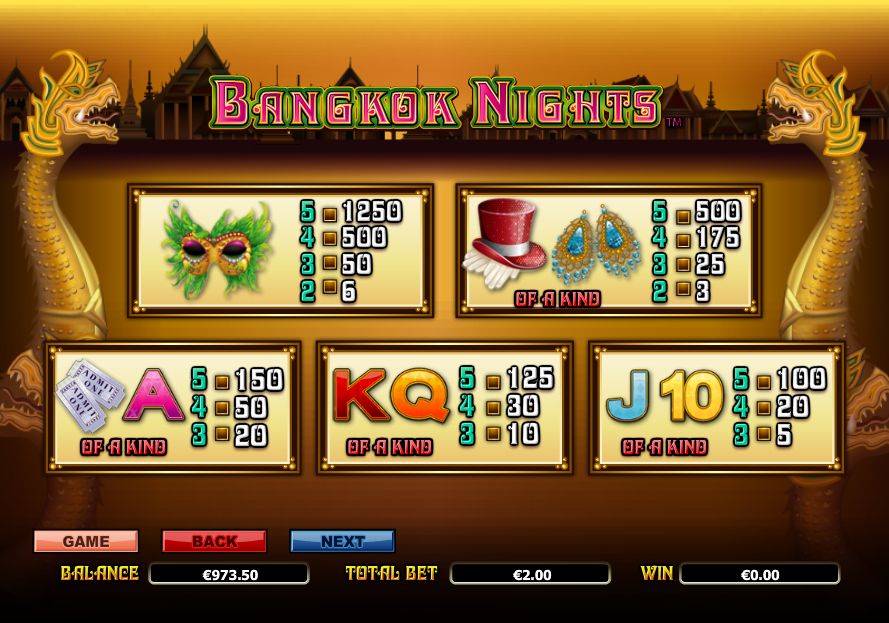 Way back in 1984 Murray Head sang a song entitled One Night In Bangkok about the pleasures and pitfalls of this oriental city. While the Bangkok Nights slot probably won’t stand the test of time quite as well as Mr Head’s tune, this Nextgen Gaming releases is not a bad attempt at picking up on the eccentricities of the Thai capital.

Bangkok Nights is a five reel slot with three rows and up to twenty paylines; there’s a yellow hue to the game’s backdrop which could be an Asian sunset but it could just as easily be a comment on the high levels of pollution there. Stylised dragons frame the reels and what looks like the Golden Palace in the background.

It’s all set inside a nightclub complete with dancing girls so the high value symbols are accessories such as a mask, a top hat, entry tickets and some earrings. Low values are the standard 10, J, Q, K and A.

The dancing girl herself is the wild symbol and she’s also a key to one of the features; the scatter is a view of the nightclub entrance.

This is triggered by landing three or more of the nightclub scatter symbols anywhere in view; you will now receive 15 free spins with all prizes during this round subject to a 3x multiplier.

More spins can be re-triggered from within this feature and the ‘pick and win’ game can also be activated.

Trigger this mini-game by landing the dancing girl on reels one and five in the base game or free spins round. All you have to do now is choose one of the symbols displayed for a prize worth up to 100x your total stake.

Any win can be gambled by clicking the ‘Gamble’ button below the reels; you can now try and double or quadruple that amount by guessing the outcome of the next playing card drawn. You have a maximum of five correct guesses but if you’re wrong you’ll lose it all.

There’s nothing particularly state-of-the-art about Bangkok Nights but it might appeal to those who have spent some time in that part of the world. Two separate bonus features are a nice touch but unfortunately Nextgen do not list their RTPs.