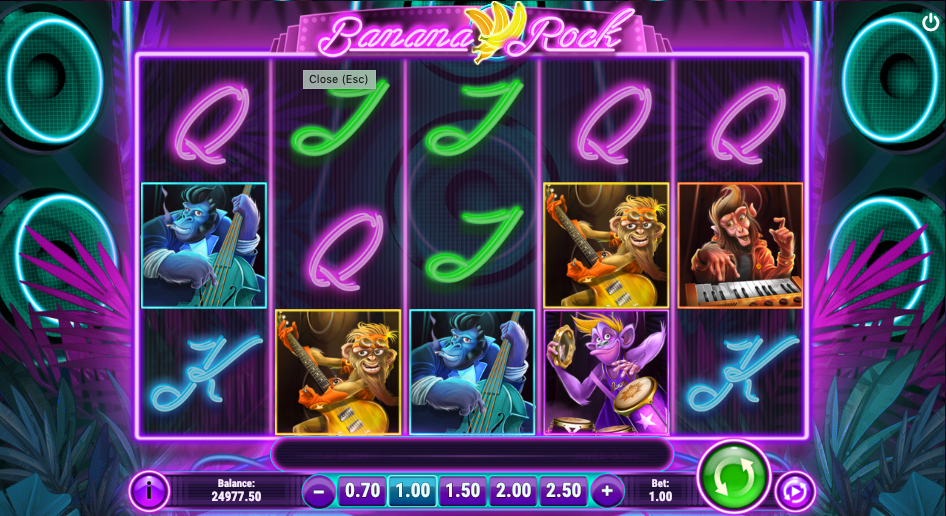 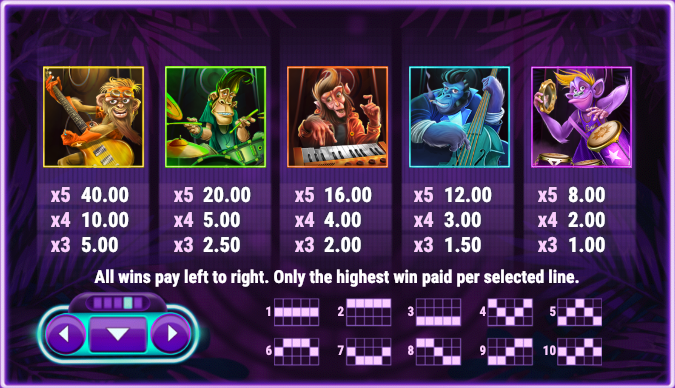 Somewhere deep in the jungle there’s a club called Banana Rock and it’s here that animals grab their instruments and jive the night away; that’s where this online slot from Play N Go is set and it offers players Rock ‘N’ Rollin wild symbols and free spins.

Banana Rock is a five reel slot with three rows and ten fixed paylines; unsurprisingly there’s a rock soundtrack to the reel action which takes place on a neon frame in front of huge speakers partly obscured by foliage.

The five high value symbols are the guitarist, the drummer, the keyboard player, the bass player and the percussionist; J, Q, K and A in neon comprise the lower values.

The monkey with the yellow glasses is wild and he’ll replace all other symbols to help make winning matches apart from the Banana Rock scatter icon.

This is triggered by landing at least two wild symbols on the reels and you’ll now see the wild on the right move towards the one(s) on the left, leaving a trail of wild symbols in its path; the reels will now respin with those wilds held in place.

Trigger this by landing two of the Banana Rock scatter symbols anywhere on reels one and five; you’ll now receive ten free spins with an extra one awarded with each extra scatter. Each stacked band member which lands will earn a multiplier which will be applied to any new wins. The multipliers stack up to a maximum of 5x per member – a final ‘encore’ spin is awarded with all collected multiplier values applied to any wins. This spin only includes high value symbols.

Banana Rock is another high quality, inventive slot from Play N Go with a pounding rock soundtrack, an interesting base game feature and a free spins round with that encore spin which guarantees a win – don’t miss this one!