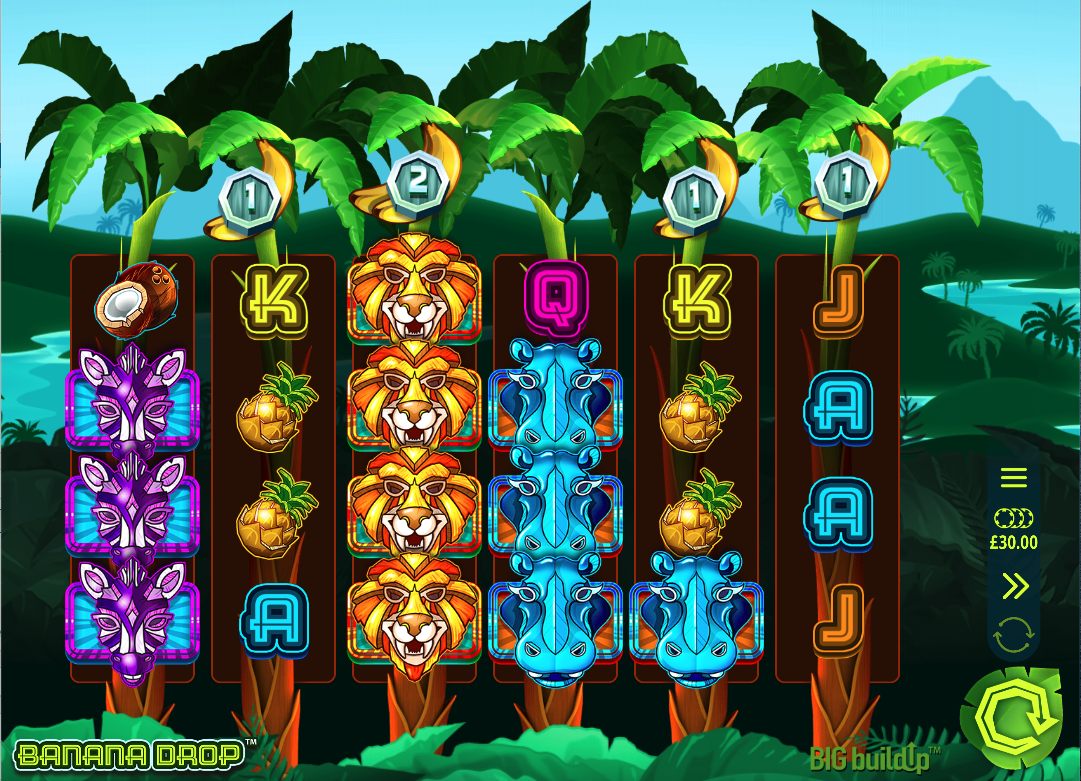 There’s a tropical, jungle setting for this animal-themed online slot from Microgaming/Crazy Tooth Studios – it’s called Banana Drop and it tempts players with a fruity feature, free spins and stakes of between £0.15 and £30.00 per game.

Banana Drop is a six reel slot with four rows and 4096 ways to win which means that there’s no payline structure and wins are formed as long as there are matching symbols on adjacent reels starting from the left hand side. Palm trees sway in the breeze behind those reels, waiting to drop bananas at random intervals.

Stylised animals including lions, zebras, giraffes and hippos represent the higher value symbols while the lower values are J, Q, K and A along with the pineapple, the coconut and the watermelon slices. The bunch is bananas is wild and it will replace everything except for the octagonal scatter symbol to help form winning combinations.

This can occur on any spin and it sees up to three bananas falling onto each reel from the trees above and covering up symbols – those bananas will then each reveal a cash prize or a wild symbol which may contribute to a win. The trees above can hold up to three bananas, marked by the number attached and the mechanism by which this number increases is called the BIG BuildUp.

Trigger this by landing at least three of the scatter symbols anywhere in view and you’ll receive seven free spins in return; the Falling Banana feature will be active on every spin during this round. Each time a stacked monkey lands on the reels the number of bananas on the tree above will hit the maximum of three rather than having to go through the BIG BuildUp process. There are no scatter symbols in play during this round so it’s not possible to trigger any extra spins.

Banana Drop is a bit more than a run-of-the-mill slot and perhaps we’ll now see the BIG BuildUp feature in more Crazy Tooth slots; the monkeys are cheerful, the colours are bright and the reel-spinning action is engaging enough to keep us here a bit longer.