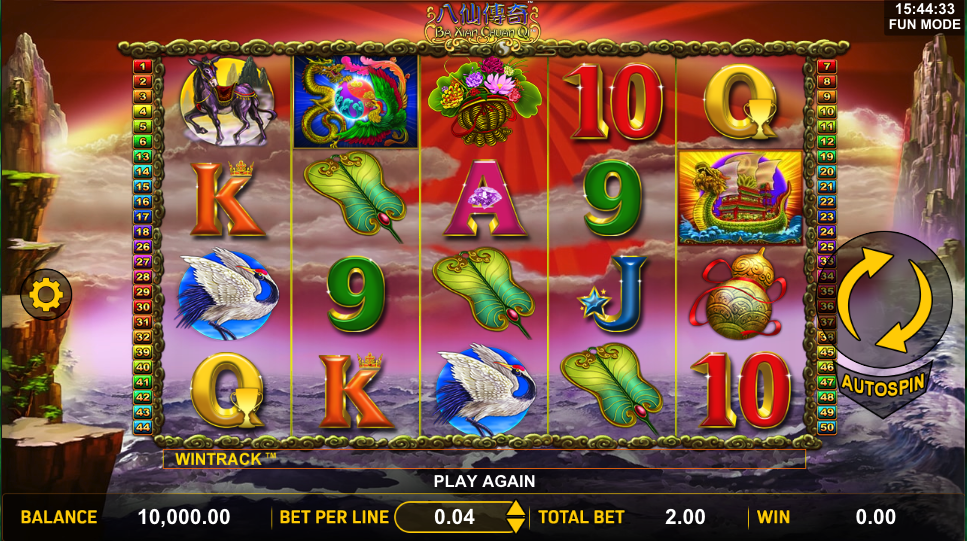 One never has to search for long to track down an online slot machine with an Chinese theme and here we have one more for your pleasure; it’s called Ba Xian Chuan Qi, it’s developed by Aspect Gaming and it references the Chinese legend of the Eight Immortals.

Ba Xian Chuan Qi is a five reel slot with three rows and fifty fixed paylines; the design of this game is stunning and the those reels float against a backdrop of a stormy sea, bordered on either side by lofty, rocky peaks.

The higher value symbols include a bunch of flowers, , a gourd, a green fan, a pony and a heron; 9, 10, J, Q, K and A represent the lower values.

The wild symbol is a dramatic scuffle between a dragon and a bird, it appears on reels two to five and it will replace all others to help form winning combos except for the ornate Chinese junk scatter.

This is triggered by landing two, three or four of the junk scatter symbols anywhere in view and essentially it’s an opportunity to either activate the free spins and earn a bigger prize. The scatter symbols will lock in place and the other reels will spin to try and land more junks.

After this spin, if you have three or more scatter symbol in view the Free Spins will be triggered; as you can see from the video above you’ll be asked to select from five immortals to determine the number of free spins awarded (up to 20) and then from three more immortals to earn a multiplier value for any wins (up to 6x).

Landing at least two scatters during this round will kick off the Respin Feature again.

Ba Xian Chuan Qi is one of the better looking Chinese slots we’ve played which is perhaps no surprise coming as it does from China; the graphics really are fabulous and the feature is not too tricky to activate. Any cons? The RTP is a slightly low 94.01%.