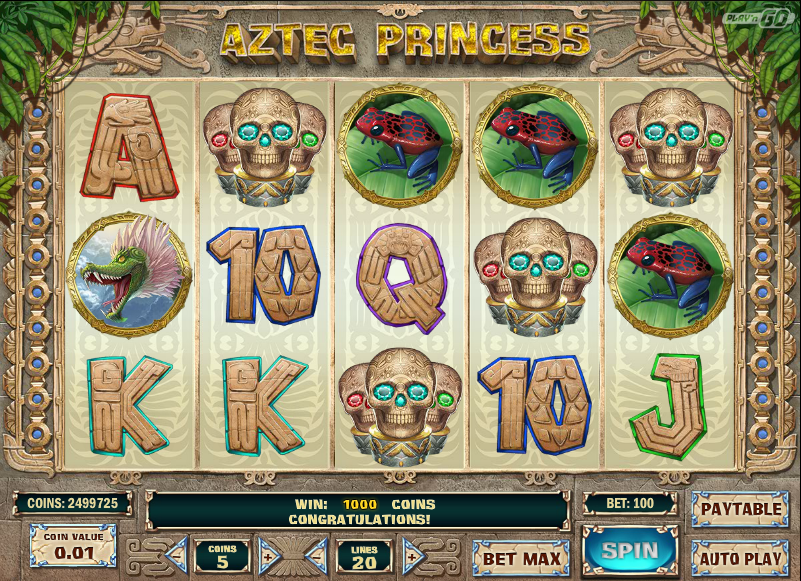 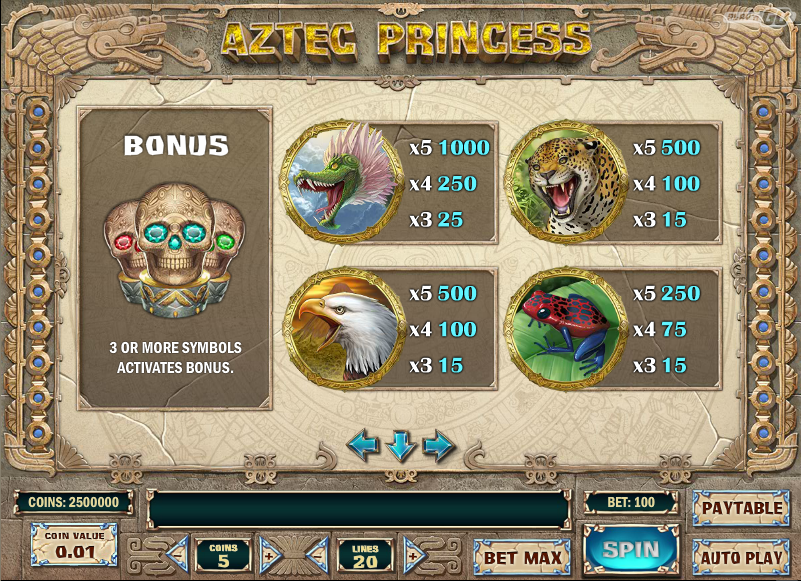 Once more it’s time for us take a trip back in time to when the Aztec empire covered large parts of Central America before the Spanish came along and spoiled the party. This online slot is called Aztec Warrior Princess, it’s developed by Play N Go and it includes two separate bonus features. Note that this game was originally called just ‘Aztec Princess’.

Aztec Warrior Princess is a five reel slot with three rows and up to twenty paylines; those reels spin on a large stone slab decorated on either side with stylised snakes. A beetle occasionally emerges from the undergrowth and wanders around at the top of the screen.

There are four theme-related high value symbols including a dragon mask, a tiger, an eagle and a red frog; lower values include the standard 10, J, Q, K and A – each carved with an Aztec design.

The wild symbol is a large golden mask and it will substitute for all others except the scatter and bonus icons – they are represented by the Aztec princess and the skulls respectively.

This is triggered by landing three or more of the Aztec Princess scatter symbols anywhere in view for which you will receive the following:

During this round the Aztec Princess becomes a wild symbols also to help you out with even more winning combos.

Trigger this by landing three or more of the skull bonus symbols anywhere in view and you will be taken to a screen displaying three plinths. Skulls will now roll in from the left hand side and you should pick one which will be transferred onto a plinth and revealed as diamond, gold, silver or bronze.

Do this three times to reveal three skulls and your prize will be based on the combination of you have selected.

Aztec Warrior Princess is a high quality slot from Play N Go which seems to dole out the bonus features with a satisfying regularity. It’s well worth checking out and it comes with a RTP of 94.17%.