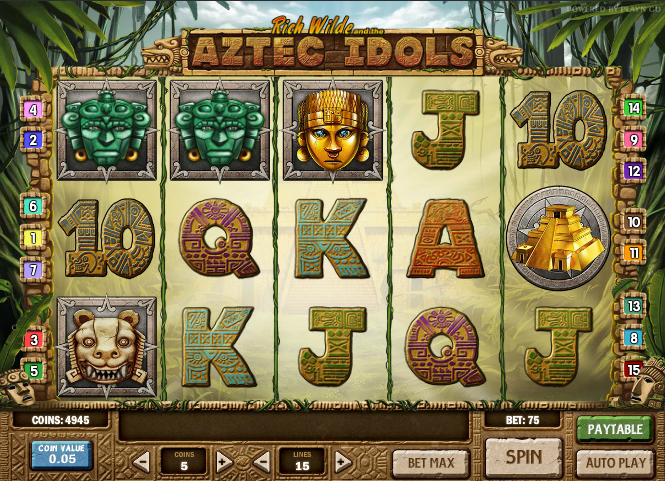 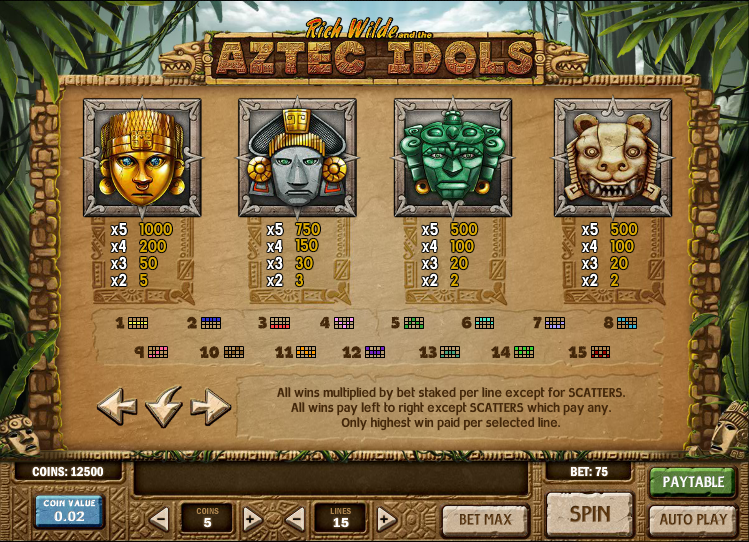 Online slot title of the week goes to this brand new game from Play N Go; it’s full title is Rich Wilde and the Aztec Idols and it adds to a small but growing band of video slots who’s theme is ancient South American culture and the search for lost and probably non-existent treasure.

Aztec Idols really looks good with lots of high quality graphics and funky animations; it’s played out over five reels and fifteen paylines and the reels looks as if they’re built in to the wall of a ruined Aztec temple. The basic playing card symbols are decorated with ancient scripts and then the higher value ones are four decorative masks.

Rich Wilde is the wild symbol, there’s a golden pyramid bonus which appears only on reels three, four and five and there’s also a sunstone scatter symbol which activates the main feature.

If you can land three of the golden pyramids anywhere on reels three, four and five you’ll get the chance to play this mini-game. You’ll be taken to a screen containing a number of idols and all you have to do is pick them until you find the one containing the poison gas. That will end the round but all the others are worth a cash prize.

The sunstones only appear on reels one, three and five but if you can land them on the same spin you will trigger this feature. You will then see a central sunstone spin and this will determine how many free spins you receive plus which symbols will act as an extra scatter for you. That scatter is obviously designed to win you a bit of extra money and it pays at the same level as the base game.

The spins can’t be re-triggered from within this feature.

You can try to double or quadruple your most recent win by using the ‘Gamble’ button underneath the reels and it’s a card prediction game where you try to pick the correct colour or suit of the next card.

Use the gamble feature with care – it’s easy to gamble every win and quickly run down your winnings. The odds against continual wins are pretty high so gamble occasionally, but not each time you land a winning combo.

The format of this game is similar to other new releases from Play N Go such as Enchanted Meadow and Wild Blood but it is different enough to make it an enjoyable experience for new players. Appropriate Amazonian jungle drums accompany your gameplay.