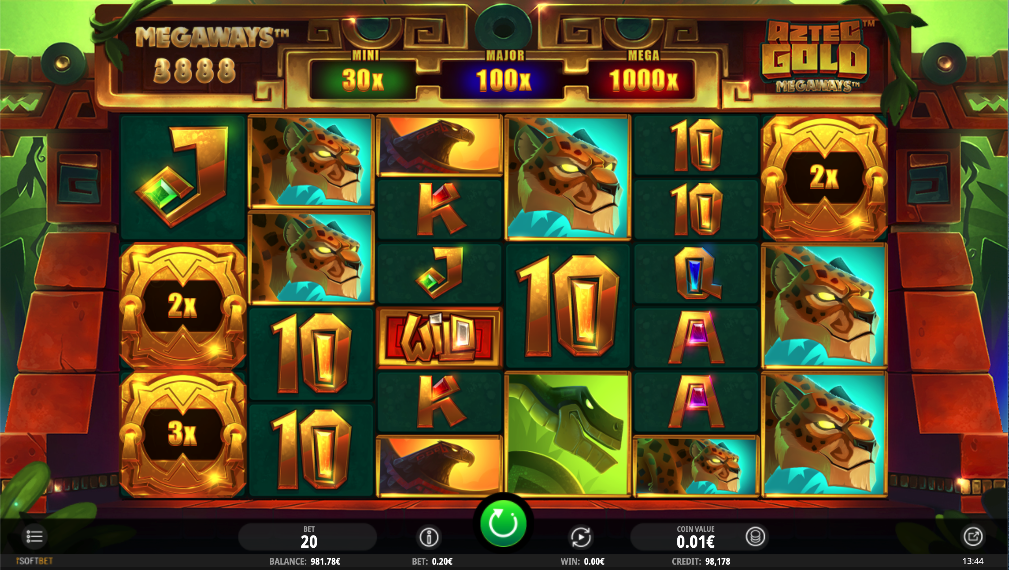 The Aztec Empire has influenced a fair number of online slots on the past and here it gets involved with the Megaways Pauline structure which can produce 117,640 ways to win under the right conditions; this game is called Aztec Gold Megaways, it’s developed by iSoftBet and it comes with cascading reels, jackpot prizes and respins.

Aztec Gold Megaways is a six reel slot with up to seven rows and it’s when those rows all land with seven symbols that the maximum number of paylines come into play – that figure is always shown to the top left of the reels. The gameplay action takes place on the side of a temple idea in some Central American jungle.

The chap with the glowing eyes is the highest value symbol and he’s joined by stylised animals in the shape of tigers, snakes and eagles; 9, 10, J, Q, K and A represent the lower values. The golden ‘Wild’ is wild and it will replace everything except for the Sun Disc scatter symbols to help form winning combos.

Every symbol in a winning combo will disappear and be replaced by more fallen in from above – more combos can then be formed which can continue the process indefinitely.

Landing at least five of the Sun Disc scatter symbols anywhere in view will trigger the Cash Respins and you’ll notice that each one contains a multiplier value. You’ll now start with three free spins with those scatters locked in place and each new one which lands will reset the number of spins to three again.

The round is over after three spins with no new scatters or if all positions are filled with Sun Discs; you’ll now be awarded the sum of all the multiplier values multiplied by your total stake. Sun Discs may also display Mini, Major and Mega jackpot totals which will also add to the prize total.

The Megaways Payline structure always adds a little extra zip to a slot machine and here it makes Aztec Gold an entertaining trip to visit a long-extinct empire; it might be obvious but the biggest wins are in the respins round.