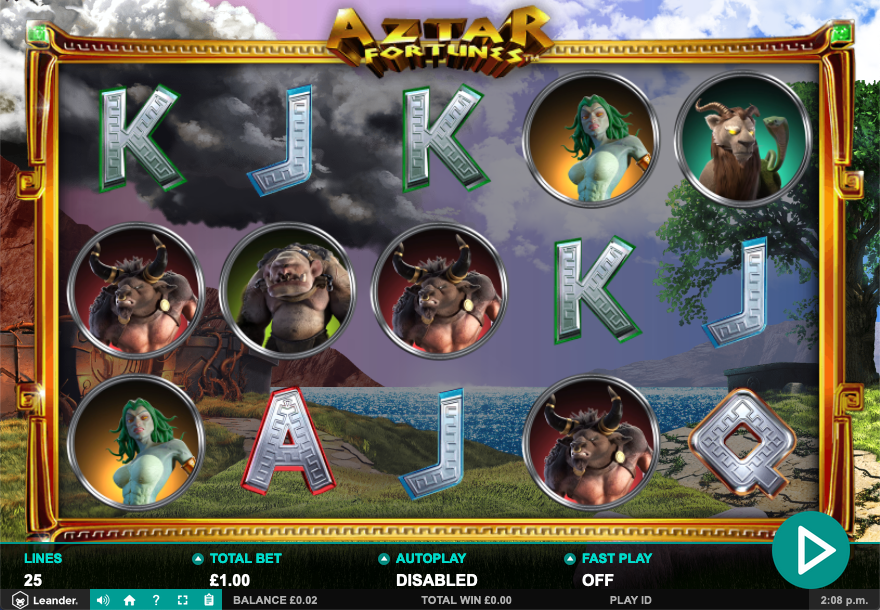 Greek mythology once again provides the story for this online slot machine from Leander Games – it’s called Aztar Fortunes and it follows the adventures of the title character as he battles various legendary ceatures to win us cash prizes, free spins and wild features.

Aztar Fortunes is a five reel slot with three rows and twenty five fixed paylines; a gold border frames those reels which overlook a Mediterranean scene of rolling hills leading down to the sparkling sea.

The high value symbols include various creatures from Greek mythology such as the Minotaur and Medusa while 10, J, Q, K and A represent the lower values.

The smiling Aztar is wild and he’ll replace all standard symbols to help form winning combinations; the orange crystal and the Free Spins symbols are the special icons.

This is triggered by landing three of the Free Spins bonus symbols anywhere on reels one, three and five; your task in this round is to land the stacked arrows on reel five which will then fill up a meter to activate one of the four creatures. When a meter is full that particular creature will become wild and an extra spin will be awarded.

Landing three orange crystals on reels two, three and four will trigger this feature which follows Aztar in a cave being chased by various mythological creatures; it’s a picking round in which you must choose an arrow from his quiver when danger is upon him which will award a prize or end the round. Reaching the final crystal awards a big prize.

This can occur randomly when Aztar and a beast are on the reels – Aztar will kill it and all instances of that beast will turn wild and lock in place while the reels respin.

Slots based on ancient tales and fantastical creatures are generally good fun and Aztar Fortunes is no exception – three separate bonus features and a dangerous trip into the Minotaur’s cave all offer the potential for some big wins.