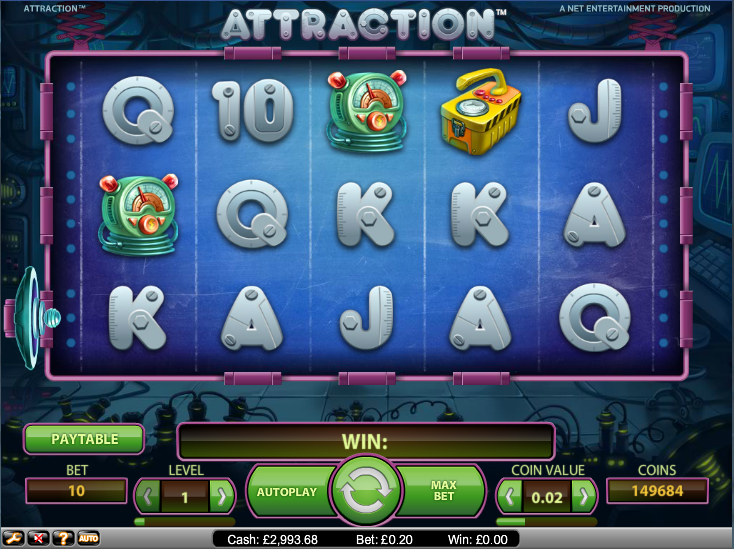 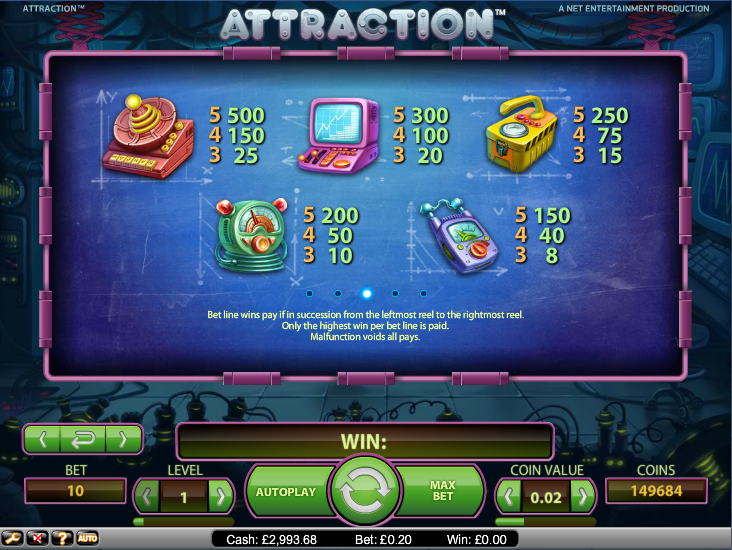 We’ve been looking forward to the opportunity of checking out this brand new online slot from Net Entertainment for a little while now. It’s called Attraction and like many Net Ent games it dispenses with the concept of separate bonus features and integrates all the extras into the base game. Keep reading to find out more about this creative new game.

Attraction plays out over five reels and just ten fixed paylines and the theme is a sort of retro-mechanical one with some lovely graphics and unobtrusive sound effects. Silhouettes of wires and computer screens surround the reels and we seem to be in some sort of darkened laboratory.

The main symbols appear to be various measuring and recording instruments and we’ll describe them by colour in low to high values – purple, green, yellow, pink and brown. 10, J, Q, K and A make up the remainder of the icons.

This is what the game is all about and every time you spin the reels you will be hoping for this to happen. You will notice a magnet appear above or at the side of the reels on each spin and it will activate it’s magnetism on that particular row or reel.

If a wild symbol appears there you will receive a respin with the original wild held in place and an extra sticky wild added. The respin will also include two magnets so you have more chances of landing more wilds and continuing the process. Big wins seem to occur quite regularly within this feature.

There’s absolutely no interactivity here so we can’t really offer any advice except to set the Autoplay up and watch the top quality graphics and animations in action.

This slot is an example of what Net Entertainment does best in the way the feature is integrated into the main game. The advantage here is that the respins are triggered far more regularly than a separate feature would be and it has the effect of keeping the player interested for longer. Good stuff!