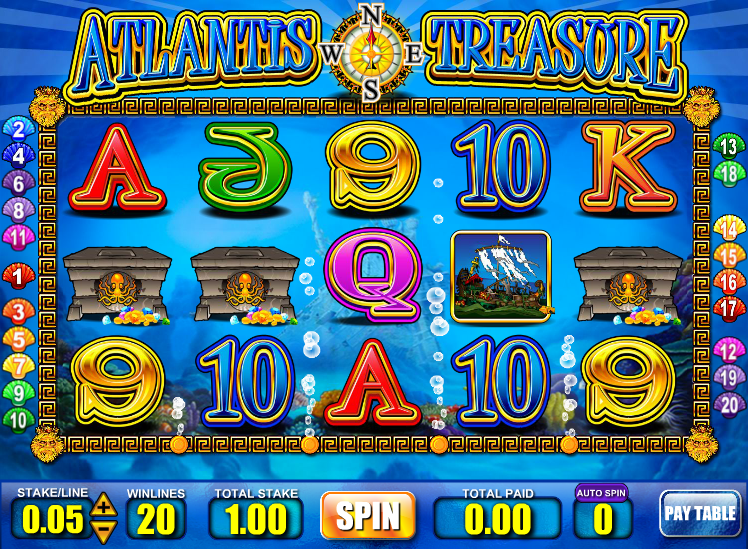 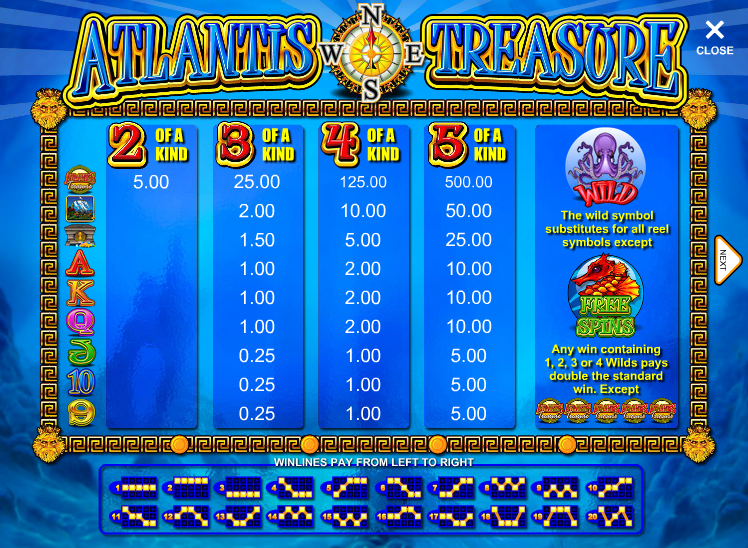 Deep beneath the ocean waves lies the lost city of Atlantis; destroyed in some cataclysmic event never to be seen again. That’s all nonsense of course – it was a figment of the Greek philosopher Plato’s imagination but the legend lives on anyway in all sorts of ways. This online slot from Mazooma Interactive is one example; it’s called Atlantis Treasure and it includes a clever little feature we’ve not seen before so read on to find out more.

Atlantis Treasure is a five reel slot with three rows and twenty fixed paylines. Through the colourful reels we can just about make out the shell of a sunken ship on the seabed while bubbles emerge from between the symbols.

There are only three high value symbols – a treasure chest, a shipwreck and the game’s logo; 9, 10, J, Q, K and A represent the lower values.

The purple octopus is the wild symbol which will double any wins to which it contributes; the red seahorse is the scatter symbol.

You will notice that there is a compass above the reels and each time a winning spin is landed the needle will spin and point to one of the four directions. The reels will now move in that direction, helped by a big wave. Another win on this fresh set will move the reels in the same direction again and this continues until you fail to win.

Landing three or more of the seahorse scatter symbols anywhere in view will award the following:

All wins during this feature are tripled and the Atlantis Treasure Bonus is still active. Additionally, landing three+ more scatters will award more free spins.

While the graphics may not be state of the art, the Atlantis Treasure bonus makes this a really enjoyable game to play. We’ve made a profit each time we’ve played but that’s probably just a bit of good luck.