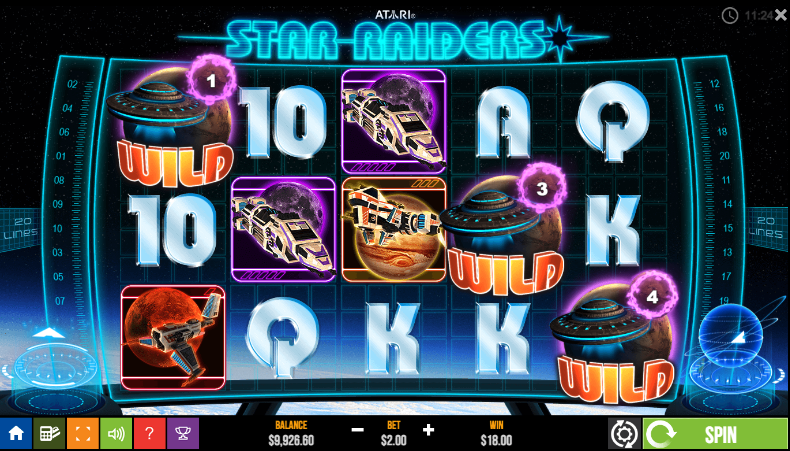 If you can remember a console game called Atari Star Raiders then you’ve probably already reached some significant age milestones in your life – it was released in 1979 and is now regarded as one of the most important video games of all time. Pariplay have now developed an up-to-date online slot of the same name and you can read all about it below.

Atari Star Raiders is a five reel slot with three rows and twenty fixed paylines; like the original game it’s designed so you’re looking through the cockpit of a spaceship and the reels spin on the screen in front of you.

There are five high value symbols which are represented by spaceships of different colours – orange, blue, yellow, green and purple; 10, J, Q, K and A represent the lower values.

The wild symbol is a big ‘Wild’ which substitutes for all others except the Free Spins scatter icon; the wild also has it’s own bonus feature which is described below.

This is triggered whenever one or more wild symbols appear on the reels; each wild will display a small number between 2 and 5 which is the number of spins it will remain locked on the reels for.

Locked Wilds can occur in the base game and the free spins round.

Trigger this by landing three or more of the Free Spins scatter symbols anywhere in view; you will now receive 18 free spins on a set of reels which now has 243 ways to win instead of just 20 paylines – matching symbols on adjacent rows win, starting from the left hand side.

More spins can be triggered by landing more scatters during this round.

Atari Star Raiders makes the transition from retro console game to online slot with no difficulty – it’s a high quality game with some creative features and an RTP of 94.50%.