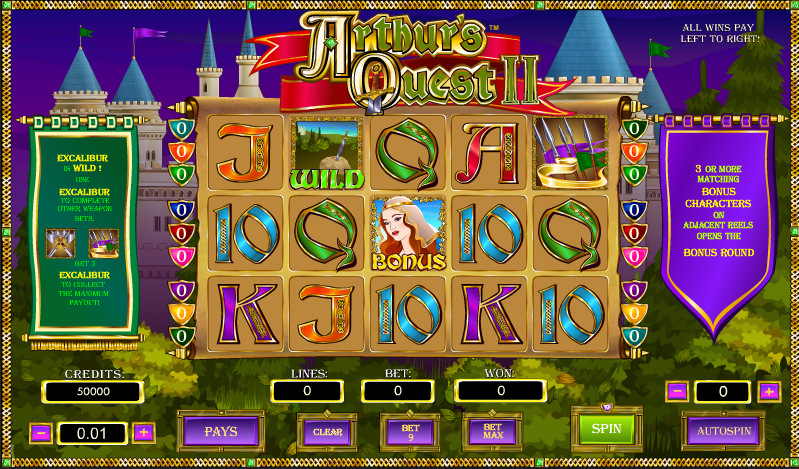 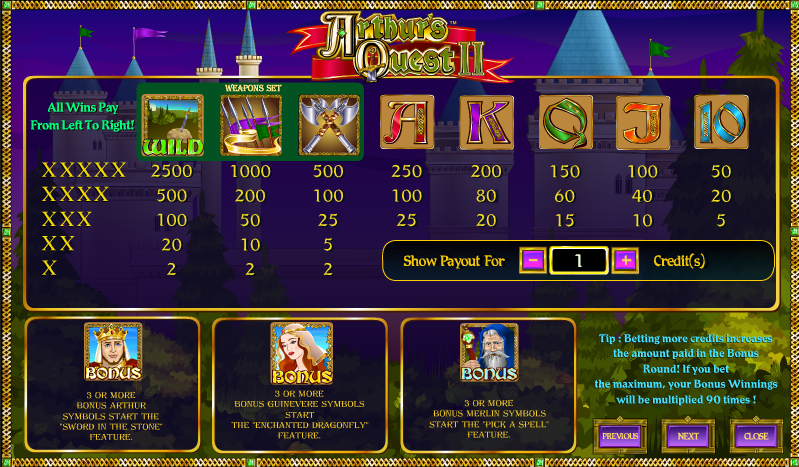 The legend of King Arthur and the Knights of the Round Table occupies a popular spot in English folklore and it’s also provided online slots developers with lots of ideas in the past. Arthur’s Quest II follows on from the original Arthur’s Quest and it’s fair to say it’s a pretty similar game – it’s from Amaya Gaming s read on to find out more.

Arthur’s Quest II plays out over five reels and nine paylines and the backdrop to those reels is a view of Camelot’s turrets above the treetops. The symbols are a little classier than those in the original and include the usual 10, J, Q, K and A along with a pair of axes and some lances.

The wild symbol is the famous sword in the stone and it only substitutes for other weapons. There are three bonus symbols – Arthur, Guinevere and Merlin – and each have their own associated mini-game.

For all bonuses, three, four or five matching will give you a 1x, 2x or 3x multiplier of the bonus win.

Sword In The Stone

Land three or more of the Arthur symbols anywhere on the reels to trigger this feature. You will be taken to a screen with a number of swords in a stone and all you have to do is click on them to reveal multipliers. The round is over when you find the ‘Finish’ message; find it on your first click and you’ll collect all the multipliers.

Three or more Guinevere’s anywhere on the reels will kick this round off; you don’t have to do anything – just watch a dragonfly hover around and pick a fly to eat, earning you a prize as it does so.

Three or more Merlin’s anywhere on the reels will trigger this game. Just pick one of the spells on offer to reveal your prize.

Betting higher amounts in the base will mean proportionately higher prizes in the bonus games.

At a glance, this game is not much of an advance from the pretty poor Arthur’s Quest; the symbols have been poshed up a bit but otherwise it seems to be very similar – the bonus games certainly are. It’s the better choice between the two but still not much to shout about.