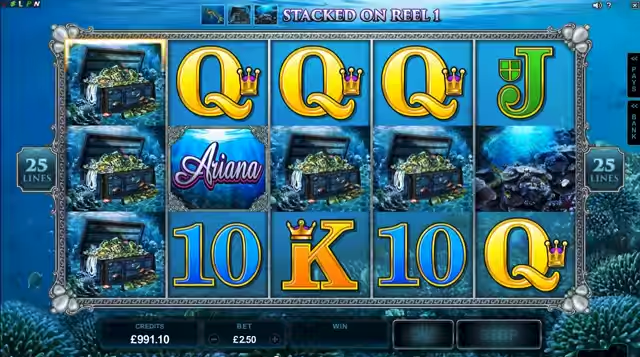 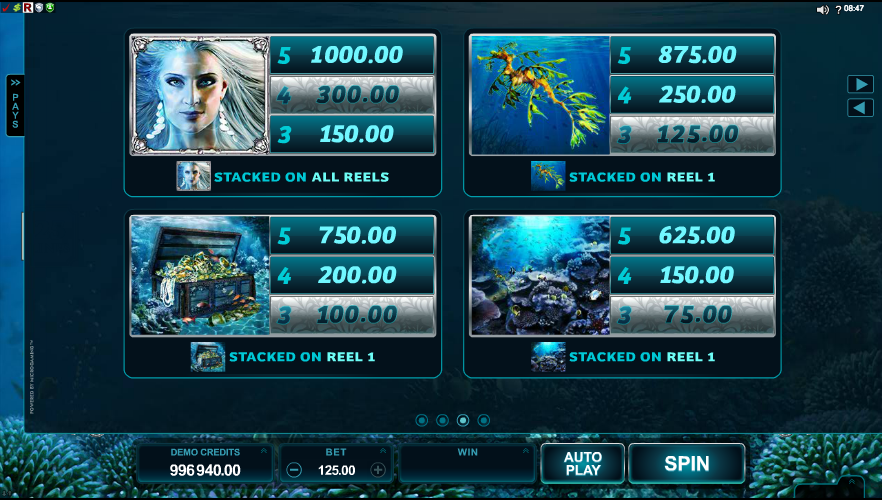 Deep beneath the ocean waves lives Ariana, a beautiful creature described by Microgaming as the ‘heroine of the high seas’ in this mermaid-themed online slot. There are already plenty of ocean-themed slots but each new one adds a little extra to the accumulated total and this particular one is rendered in High Definition. Read our review to find out whether Ariana is worth checking out.

Ariana is a five reel slot with three rows and twenty five fixed paylines; those reels are framed by ornate silver and pearls and in the background there’s an underwater scene with shoals of fish disappearing into the gloomy distance.

There are four high value symbols – Ariana, some seaweed, a treasure chest and a view of the sea bed; Ariana appears stacked on all reels and the others are stacked on reel one. 10, J, Q, K and A make up the lower values.

The Ariana logo is wild and substitutes for everything except the scatter; that’s the starfish which also activates the main feature.

Stacked Symbols On Reel One

If you can land a matching stack of symbols on reel one then all other matching symbols in view will also expand to complete their respective reels, hopefully leading to some big wins.

This is triggered by landing three, four or five of the starfish scatter symbols anywhere in view; you will now receive fifteen fishy free spins for your efforts.

During those spins the stacked symbols on reels one are still active but additionally any wilds on reels two to four will also expand to fill the reel. This can be a lucrative extra and it makes up for the lack of a multiplier for your wins.

We enjoyed playing Ariana but it does seem to lack a bit of sophistication compared to some other recent releases. The bonus feature is a good one though and there’s a laid back, unobtrusive soundtrack.