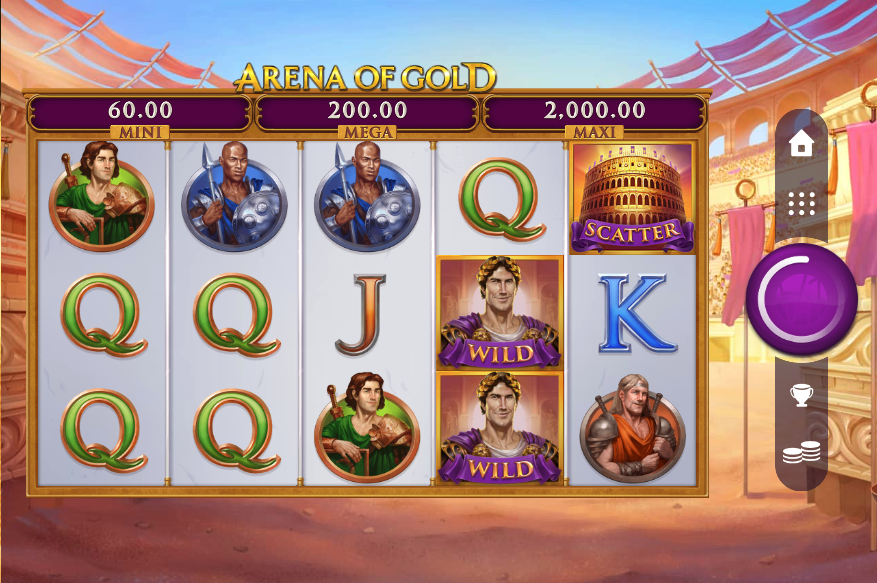 The blood, the sand and the cheers of the crowd tell us that we’ve entered the Colosseum in ancient Rome to spin the reels on this online slot from Microgaming/All41Studios; it’s called Arena of Gold and it comes with free spins and three jackpot prizes to enjoy.

Arena of Gold is a five reel slot with three rows and twenty five fixed paylines; a neat, gold frame contains those reels which spin against a backdrop displaying the vast, packed stadium under the scorching Mediterranean sun.

The four high value symbols are all arena combatants dressed in different colours (red, blue, green and orange) and brandishing various weapons; J, Q, K and A make up the lower values. The unnamed Emperor is wild and he’ll replace all standard symbols to help create winning matches – the Colosseum and the and gold coins are the special symbols.

Landing three of the Colosseum scatter symbols anywhere in view will award five free spins and during this round reels two, three and four will combine into one with symbols that fill up all positions. Each of these giant symbols counts as nine standard symbols unless it’s a scatter in which case it’s just one. Retrigger the spins by landing three more scatters during this round.

This is where you’ll get a shot at those jackpot prizes above the reels and it’s kicked off by landing at least six golden coins in view; you’ll now receive three spins with those coins locked in place but any new coin landing will reset the spins to three again. When there are no more coins or all positions are filled, the amounts shown on each coin are awarded – if there are three coins displaying matching jackpots (Mini, Mega or Maxi) then that prize will be yours.

Arena of Gold is an enjoyable trip back to watch a sport more brutal than Rugby League and to win some prizes at the same time; the bigger wins seem to be in the Golden Respins but the free spins are not too shabby either.