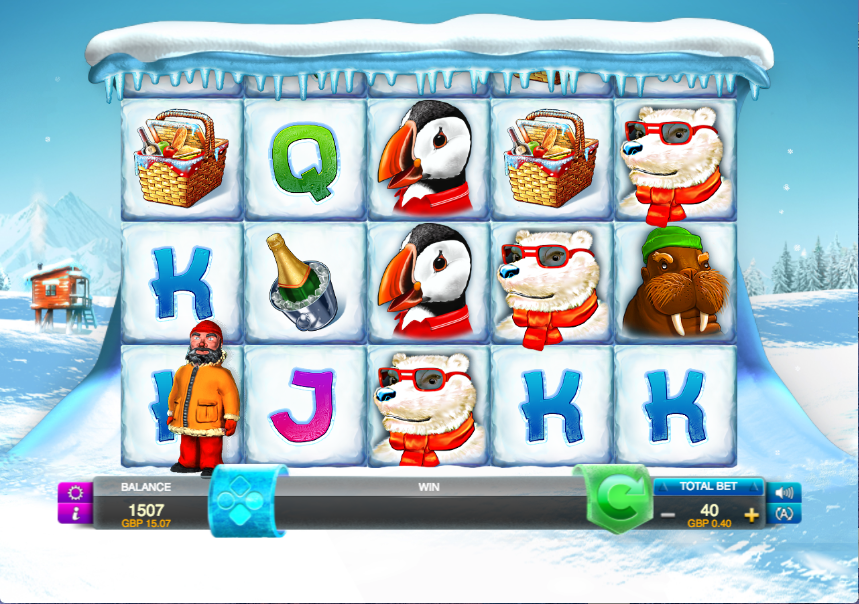 The fun doesn’t stop just because it’s a bit chilly outside, at least that’s the case if you’re an animal with not only thick fur but hats and scarves as well; they’re the characters in Arctic Party, this online slot machine from Gameiom with several interesting features.

Arctic Party is a five reel slot with three rows and twenty fixed paylines; it’s all very cold and the symbols spin on blocks of ice in front of a background scene containing distant mountains, pine trees and a small cabin with smoke rising from the chimney.

The high value symbols are all related to the theme and include the walrus, the puffin, the picnic basket and a bottle of champagne on ice; J, Q, K and A make up the lower values.

The wild symbol is a big ‘Wild’ and it will substitute for all others to form winning combinations except for the polar bear scatter and the Free Spins icon.

During gameplay the chap with the beard and orange jacket will wander from left to right below the reels and then back again; if he ends up on the same reel as a wild symbol it will expand to fill all positions on that reel. The expanded will apply a multiplier of 2x, 3x, 4x, 5x or 6x if it’s on reels one to five respectively.

This is a collapsing reels feature in which any symbols in winning combinations will disappear and be replaced by more falling in from above; more wins can then be formed and this process can continue until no more wins are made.

This is triggered by landing three, four or five of the Free Spins symbols for which you will receive three, four of five free spins; before each spin one of the following features is made active:

There’s no expanding wild or Free Spins symbol in this round so it’s not possible to trigger any more free spins.

Arctic Party is a top notch slot with some cute graphics and plenty of clever features to aim for; it’s another one to recommend from Gameiom and it comes with an RTP of exactly 96.00%.