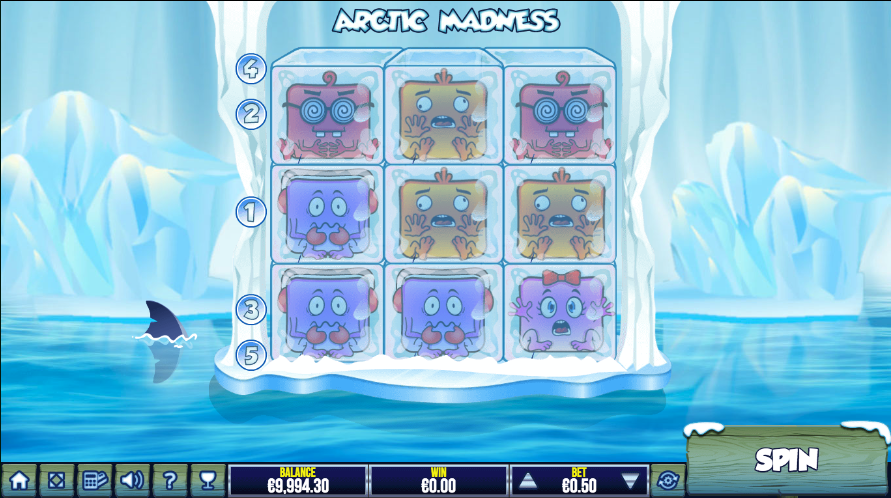 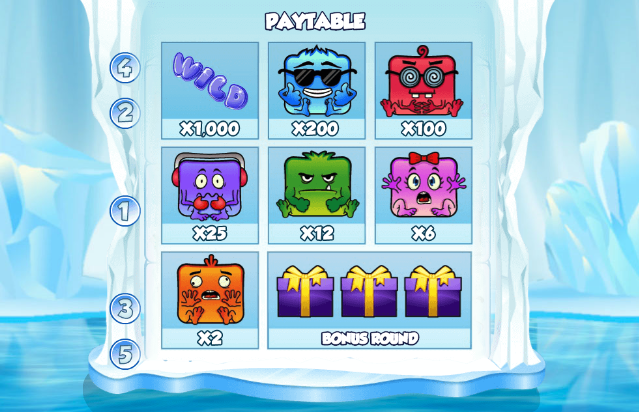 It’s chilly up north and it’s gets chillier the further north you go; in the case of Arctic Madness we’re heading up to where the ice is present all year round and small creatures are trapped in blocks of ice for our online slot playing enjoyment. This game is developed by Pariplay and you can read all about it here.

Arctic Madness is a three reel slot with three rows and five fixed paylines; those reels are set on a block of floating ice around which swim some menacing sharks. Walls of ice fill the distance to complete the chilly scene.

There are six odd characters in this game and we can differentiate them by colour from the most valuable to the least – blue, red, purple, green, pink and orange.

The wild symbol is a purple ‘Wild’ and it will substitute for all others to form a winning combo except for the gift scatter/bonus icons.

The gameplay in Arctic Madness is interesting – each time a winning combo is formed, those symbols involved will defrost and fall into sea; more symbols will take their place and more wins can be formed in this manner.

This is triggered by landing three or more of the gift bonus symbols anywhere in view and you will be taken to a screen showing the characters dancing about on the floor of an ice cave. Above them are various stalactites hanging from the ceiling and all you need to do is pick one – it will fall on a character and award a multiplier which is applied to your total bet.

Arctic Madness is a pleasure to play and it loses nothing by having just three reels rather than five; the gameplay is enchanting, the bonus seems to be triggered regularly and there’s an RTP of 95.02%.