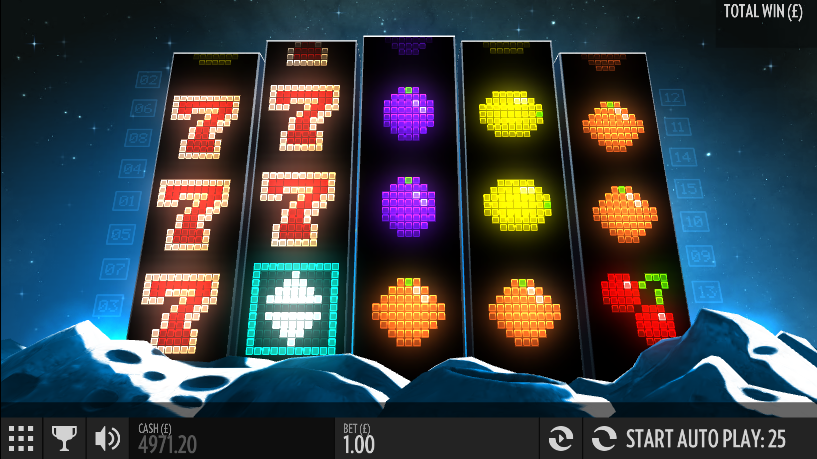 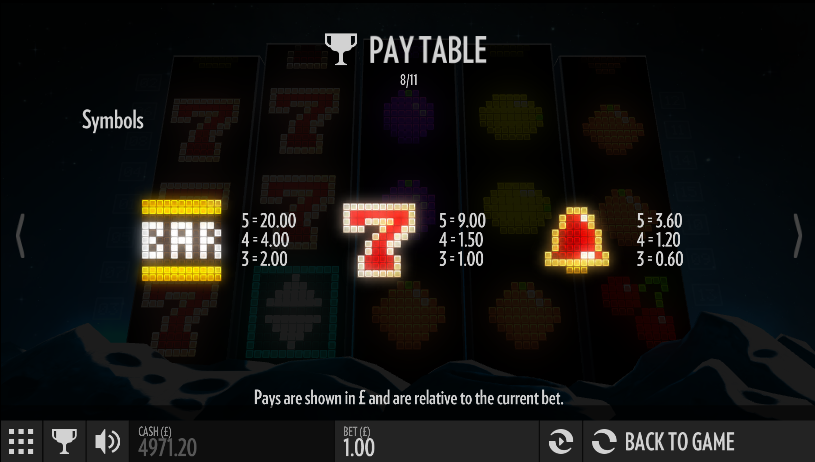 Remember the early days of arcade gaming and addictive diversions such as Space Invaders, Galaxian and Phoenix? If you don’t you should track these games down online and check them out. Arcader is a brand new online slot from Thunderkick Games which uses those 64 bit games as the basis to develop a compelling reel experience.

Arcadia plays out over five reels, three rows and fifteen paylines and the pixellated symbols spin on black columns which are themselves placed against a background of a dark, starry sky. The rocks of an alien planet make up the foreground.

The base game symbols are all pixellated versions of traditional slot icons and include cherries, oranges, plums, lemons, watermelons, bells, sevens and bars.

The special symbols include a ‘W’ wild, an arrow expander and two scatters – a ‘B’ and and ‘M’ – which activate their own features.

The expander is a type of wild symbol and it will expand to fill all positions on a reel if it can form a win. It will only match one symbol but it will always choose the most valuable win available.

The big green ‘B’ is what you need to land here and three or more anywhere in view will win you the following:

With each spin there’s a chance that one position on reels two, three and four will be zapped into a sticky wild; any that land will remain in place for the rest of the spins.

Landing three or more of the big ‘M’ symbols will trigger this second bonus feature and it’s a picking game. Four or five of the triggering symbols landed will mean a 2x or 6x multiplier respectively.

You will be prompted to choose from the grid of pixellated symbols available, each of which is worth a cash prize. Keep going until you find the red ‘X’ at which point the round is over.

The look and feel of this game is fantastic even down to the female, slightly robotic voiceover which exclaims phrases such as “Awesome” and “Great” when you score good wins. The music is as genuinely annoying as it used to be with such games but you can easily reach for the mute button. Highly recommended.