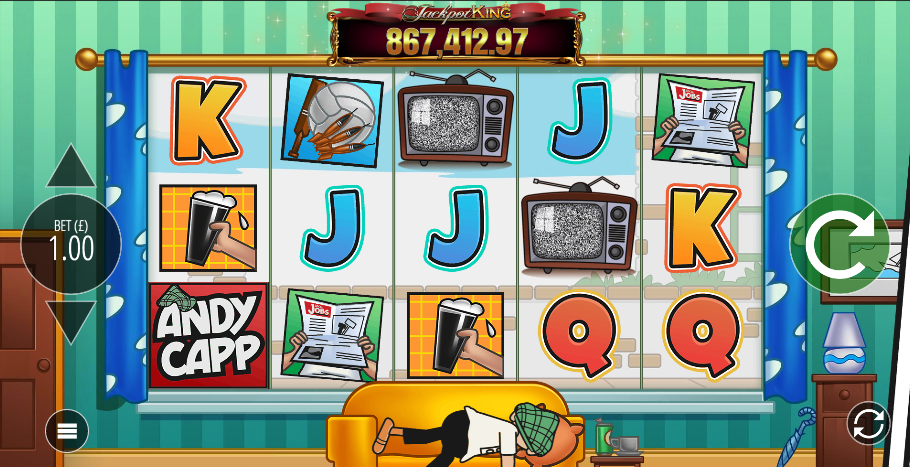 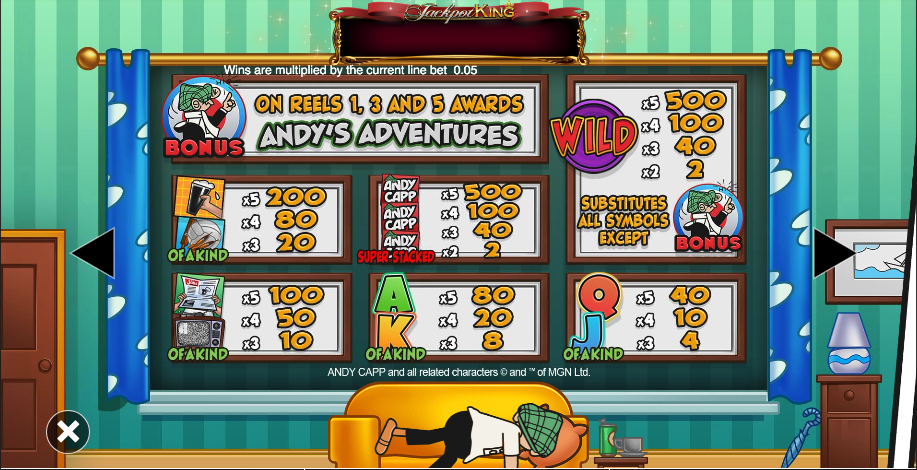 Daily Mirror readers will be well aware of the antics of Andy Capp, the jobless, lazy and mostly drunk anti-hero of the long running comic strip; he’s now also the theme of this online slot from Blueprint Gaming which comes with numerous bonus features and a progressive jackpot.

Andy Capp is a five reel slot with three rows and twenty fixed paylines; the action takes place in the Capps’ house with Andy lounging on a settee beneath the windows on which the reels spin.

The high value symbols include a pint of something dark, a football, a newspaper, a television and the game’s logo (which appears stacked); J, Q, K and A make up the lower values.

The wild is big, red ‘Wild’ on a purple background and it will replace all others to help form winning matches except for the Andy Capp bonus symbol.

This is kicked off by landing three Andys anywhere on reels one, three and five and you will now get to watch him walk across the screen to reveal one of five bonus games:

These mini-features can be awarded randomly on any base game spin:

Angel Princess is part of Blueprint Gaming’s Jackpot King progressive jackpot series and this feature is triggered by landing five jackpot symbols on the reels. You’ll then play a reel set where the aim is to collect crowns before the round ends – manage at least 15 and you’ll get to spin the wheel of fortune which could win you the progressive jackpot.

Andy Capp is a fitting tribute to the alcoholic northerner who spends his days asleep or in the pub; there are bonus features galore, a progressive jackpot, a design faithful to the original comic strip but a slightly low RTP of 92.70%.