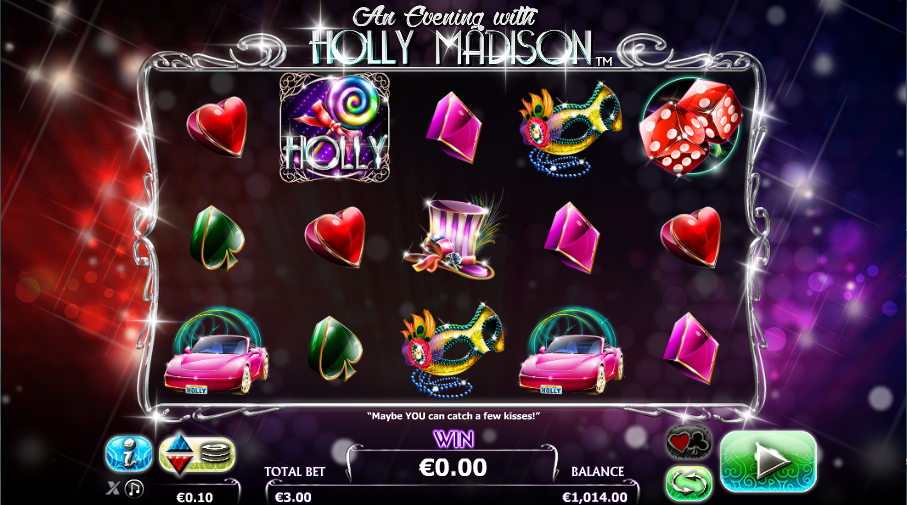 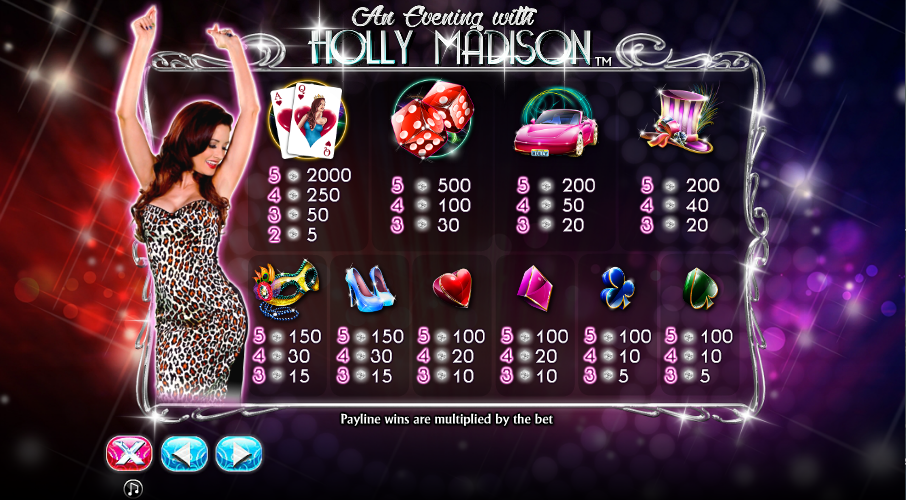 We’re happy to admit that we had never heard of Holly Madison until this online slot hit the casinos but apparently she’s some sort of U.S. television personality. She now has her own game called An Evening With Holly Madison and it’s developed by Nextgen Gaming so if you’d like to know more read the full review below.

An Evening With Holly Madison is a five reel slot with three  rows and thirty fixed paylines; it’s a glitzy design with some sparkly lights either side of the reels which spin in what looks like the frame of an ornate mirror.

There are six theme-related symbols including a pair of playing cards, dice, a pink car, a top hat, a jewel-encrusted mask and a pair of stilettos; hearts, clubs, spades and diamond playing card symbols make up the lower values.

Holly represents the wild symbol and she only appears on reels two, three and four; the Holly logo is the scatter icon which activates the main features.

This is really just an expanding wilds feature and it’s triggered when Holly wanders onto the reels and places a wild symbol there. It will then expand to fill all positions on that reel with the possibility of generating more wild reels to offer lots of winning opportunities.

This is triggered by landing three or more of the Holly logos anywhere in view and initially you will receive ten free spins. During this round you are trying to collect up to ten ‘Kiss’ symbols to trigger the Photoshoot Bonus after the spins.

The Photoshoot Bonus involves Holly trying various outfits with each successful one awarding the same amount you win during the spins.

If you land just two scatter symbols on the reels during the base game they will be held in place and the remaining reels spun to try and land one more Holly logo and trigger the free spins.

We may not know who Holly is but this slot is quite enjoyable nonetheless with various bonus features to trigger. ‘Holly Goes Wild’ happens very regularly and landing two or three will result in some big wins. There’s an RTP of 95.08%.