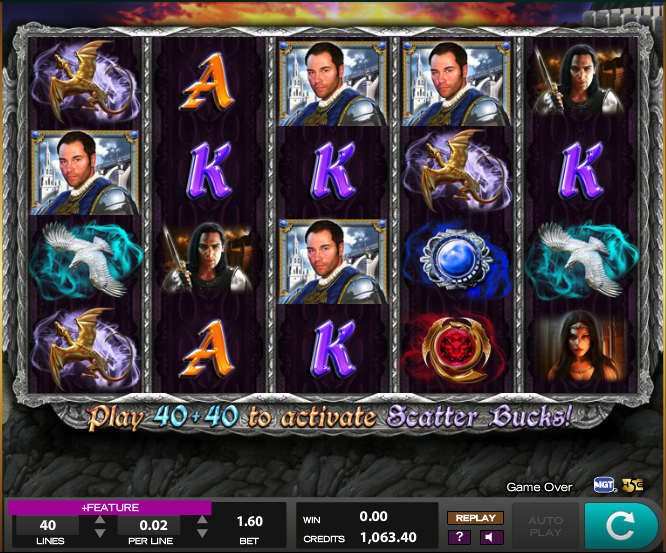 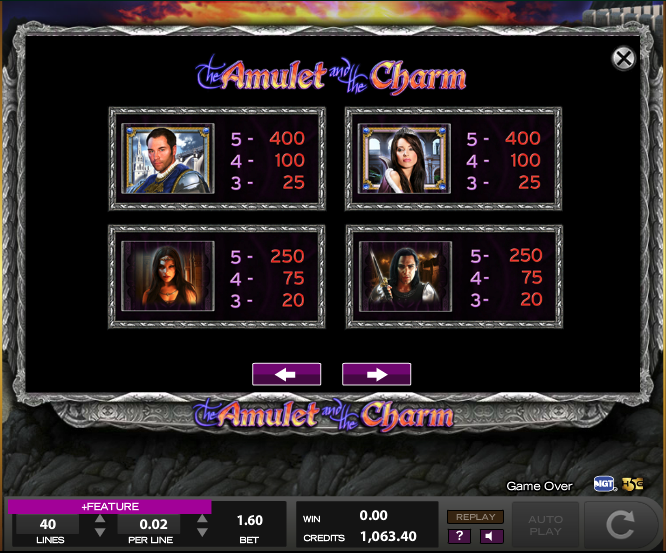 A medieval world of fantasy and chivalry awaits those online slot players who fancy checking out this release from IGT/High 5 Gaming; it’s called The Amulet & The Charm and it offers a free spins round and an optional extra feature to enhance your winnings – read all about it below.

The Amulet & The Charm is a five reel slot with four rows and up to forty paylines; those reels spin within an ornate silver frame against a backdrop of stone and a setting sun.

There are plenty of theme-related symbols on show here and they include the four main characters of this story, red and blue jewels, a white bird, a golden dragon and lastly K and A.

The wild symbol is a big ‘Wild’ and it will replace all others in a winning combo except the ‘Free Games’ scatter which obviously activates the main feature.

This is an optional extra bet which you can switch on by clicking the ‘+Feature’ button above the reels; it doubles your stake but turns the wild symbol into a potential payout as well. Thus landing the wild on the reels will award the following instant prizes:

This is triggered by landing three of the Free Games scatter symbols anywhere on reels two, three and four; you will receive seven free spins but these can be retriggered up to a maximum of 98 for the luckier players.

The Amulet & The Charm will certainly add some atmosphere to your reel spinning session although you’ll probably have to make up your own background story if that’s your thing. We like the option to pay a little extra for a bit more excitement and the RTP is stated as 95.00%.