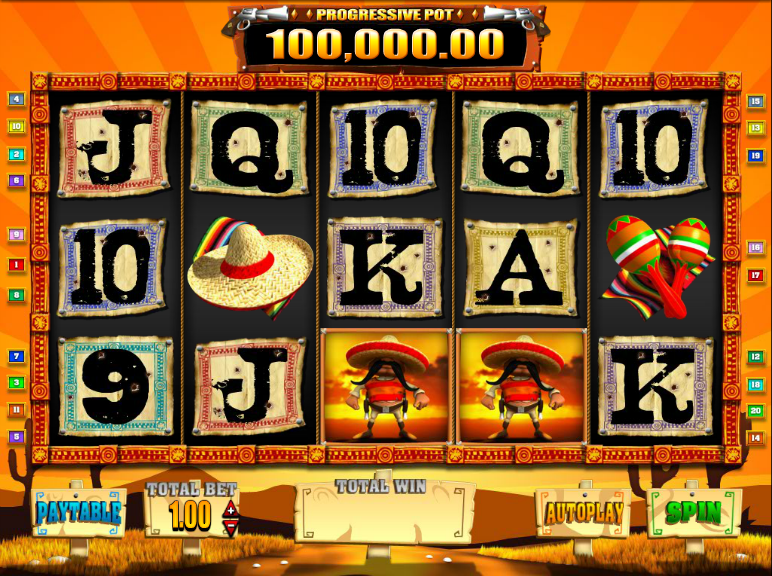 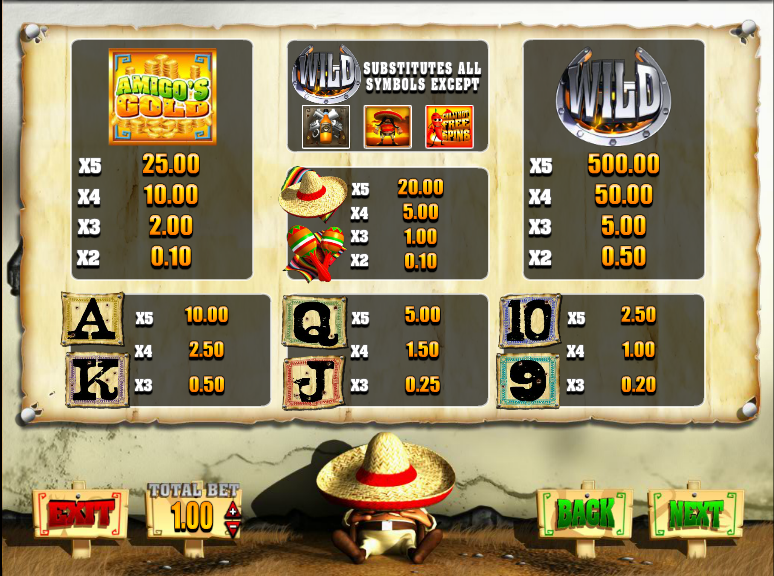 Amigo’s Gold is an online slot machine which takes us south of the border – and we don’t mean clambering across Hadrian’s Wall; we are in Mexico for this Blueprint Gaming release to check out a reel spinner which comes with three separate features and a progressive jackpot.

Amigo’s God is a five reel slot with three rows and twenty fixed paylines; those reels spin within an ornate locally-decorated frame which sits against a backdrop of a dusty landscape under a rising (or possibly setting) sun.

The high value symbols include the game’s logo, a sombrero and a pair of maracas; 9, 10, J, Q, K and A make up the lower values.

The wild symbol is a silver horseshoe and it will replace all others to form winning combinations except the three bonus icons – the chilli, the guns/tequila combo and the guy with the moustache and sombrero.

These are four Amigo-themed mini-features which can be awarded:

This is triggered by landing three of the chilli bonus symbols anywhere on reels two, three and four; the Amigo will now award up to 25 free spins on a set of reels with more wilds and bonus symbols (except chillies).

Trigger this by landing three of the moustachioed chap anywhere in view; you must now spin the gun barrel to determine how far along the train track to move; keep spinning until you find ‘Stop’ which will award prize value in the train door.

This is triggered by landing three or more of the gun/tequila bonus symbols anywhere in view; you will get to aim and shoot at bottles for prizes until your ammo runs out although hitting the ‘Extra Ammo’ bottle win more bullets. It’s quite easy to hit the bottles but you can use the Autoplay option also.

There are three ways to win the big bucks you can see above the reels:

Amigo’s Gold is an action-packed slot in which there’s always something going on whether it’s one of the main features or the Mexican Mischief – give it a go!