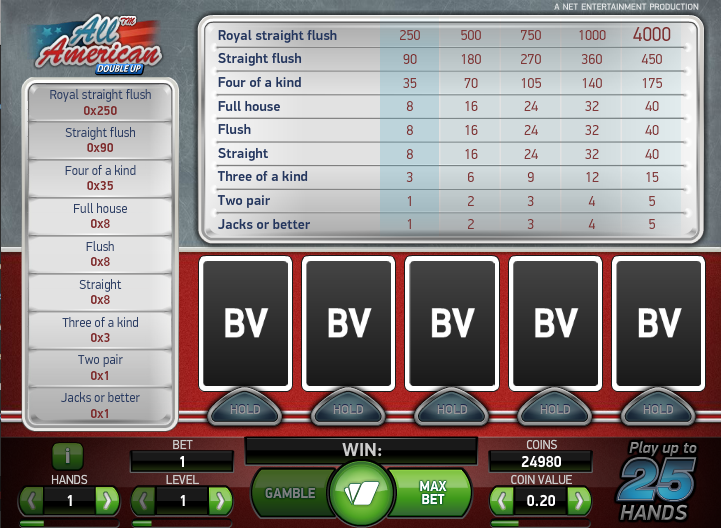 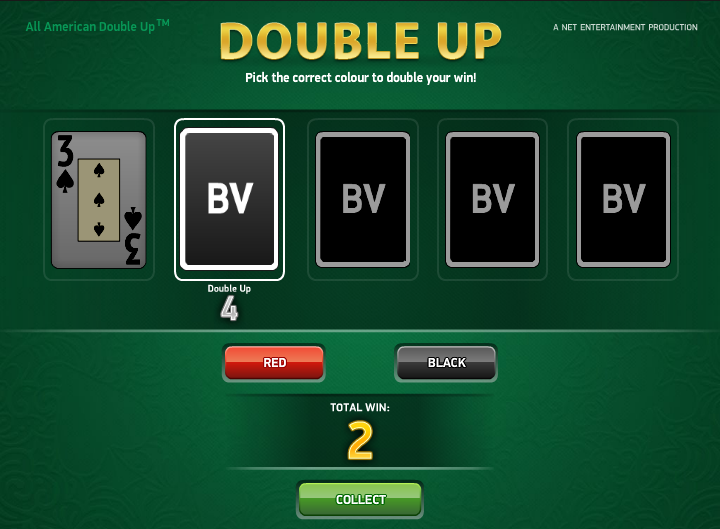 It’s video poker time again so stop spinning those reels for a few minutes and check out this smooth-looking version of the game from Net Entertainment. It’s called All American Multihand but despite the exciting name this is a straightforward game with standard video poker rules although it does pay out for Jacks or better.

Video poker players will be instantly familiar with the game screen when it first starts up; the five cards are face down in front of you with the paytable occupying the space above. To the left is the table which shows any winning hands from each round.

This is a Multihand game which means you are able to play with 1, 5, 10 or 25 hands simultaneously.

How To Play All American Multihand

To win in this versions of video poker you will need to create a hand consisting of at least a pair of Jacks. Following the first deal you will get one chance to discard and replace any cards in the hope of improving your hand.

Make your bet using the various betting options available at the bottom of the screen and then press the big green button in the centre to deal. Your five cards will now be displayed and it’s time to decide which ones to hold and which ones to replace.

When you’ve made that decision, press the ‘Deal’ button again to reveal you final hand and hopefully a big win.

All wins can be gambled by clicking the ‘Gamble’ button; you will now get the chance to double that win five times by correctly guessing the colour of the next card drawn. Incorrect guesses mean you lose your win.

You may occasionally find yourself torn between holding a pair which are lower than Jacks or a single Jack or higher. Statistically you are slightly more likely to draw a matching Jack or higher than a card which will make three of a kind but the payback for three of a kind is greater. We say go for the latter.

There’s nothing much wrong with this video poker version although it has a slightly lower RTP than the seemingly identical Jacks Or Better from Net Ent – 97.05% at bet levels 1-4 and 98.11% at bet level 5. For optimal gameplay, check out our video poker strategy page.