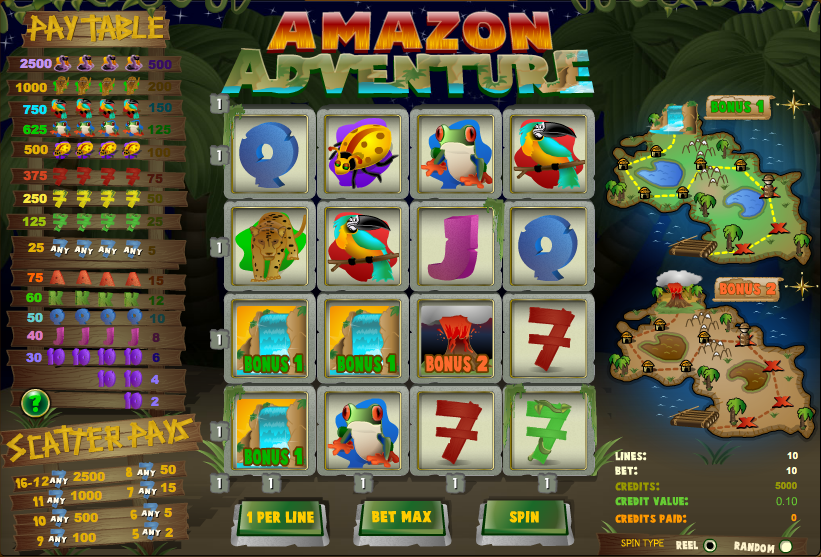 Well here’s something a little different – it’s almost an online slot but Amaya Gaming has engineered enough variety  so that this is no longer a five reel or three reel game but more of an arcade-style offering. Amazon Adventure seems as though it has been influenced by a number of other games but it’s an interesting concept and certainly an enjoyable one.

Amazon Adventure plays out over a 4 x 4 grid which contains ten fixed paylines.  All those paylines are vertical, horizontal or diagonal and the reels are set against a dark and lush jungle background. The symbols are a combination of the usual 10, J, Q, K and A plus some cute Amazonian creatures including a parrot, a tree frog, a snake and a leopard.

There’s a scatter symbols which is a seven and two bonus symbols – a little waterfall and a volcano which pertain to the two little islands on the right of the reels.

Interestingly you can choose to spin the reels in the standard way or in a random fashion by choosing your preferred option in the bottom right hand corner.

Amazon Adventure contains the sort of bonus feature we like – a guaranteed one. You will by now have noticed the two islands to the right of the reels labelled Bonus 1 & Bonus 2. Each time you land the correct symbol on the reels, the little explorer makes his way along the marked trail on the island.

The first time you play the game you might expect some sort of mini-game when you reach the waterfall or volcano but in fact what you get is a cash prize. That’s not bad of course but it’s a little disappointing.

The explorer will return to the starting position after reaching his destination.

This is a good-looking game with a funky little bonus feature; the win is guaranteed eventually of course but you may well spend more money then you receive on actually getting there. Nevertheless, well worth a go.