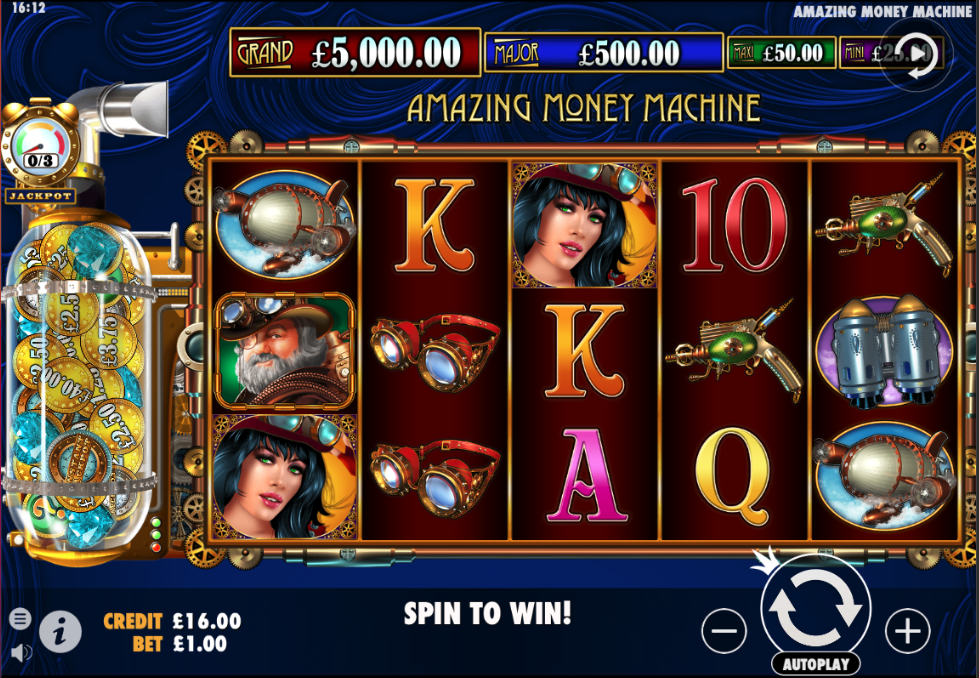 One thing we would not describe an online slot machine as is a ‘money machine’ but in this game from Pragmatic Play the Amazing Money Machine is something a little different – it’s a steampunk-themed device which offers players the chance to win the Money Respin feature along with Money symbols and jackpot prizes.

Amazing Money Machine is a five reel slot with three rows and ten fixed paylines in its initial state; pistons and cogs frame those reels with a cistern full of valuable symbols on the left hand side.

Theme-related symbols include the male and female characters, the airship, the jetpack, the gun and the goggles; 10, J, Q, K and A make up the lower values. The heart-shaped gem is wild and the special symbols are the clock and four different Money icons.

This is the cistern to the left of the reels and at random during the base game and Money Respins it can disgorge Money or bonus symbols onto the reels.

Landing at least five mixed Money symbols anywhere in view will kick this round off and if three appear on the reel three then the reel set will increase in size to 4×5 or 5×5 for thirty or sixty paylines respectively; only those symbols will remain on screen and lock in place and the number of respins received equals the number of triggering symbols.

Every extra Money symbol landing locks in place and awards an extra spin and when all this is finished you’ll receive prizes depending on which Money symbols are in view.

Filling all positions will end the round and start it again with five more spins.

This is a picking round triggered by landing three bonus symbols on reels two, three and four, collecting three Jackpot Money symbols in the Respins round or landing one Instant Jackpot symbol at any time. When the picking round starts you need to find three matching symbols to win the corresponding prize – Grand (50000x), Major (500x), Maxi (50x) or Mini (25x).

Pragmatic Play now how to create something a little bit different and the Amazing Money machine ticks all the boxes – an unusual theme, several clever features and a top prize of 50,000 coins – what’s not to like?

Amazing Money Machine is a Steampunk-themed video slot from Pragmatic play with five reels and between ten and sixty paylines.

The Return To Player percentage for Amazing Money Machine is 95.49%.

How To Win On Amazing Money Machine?

Where can I play Amazing Money Machine?