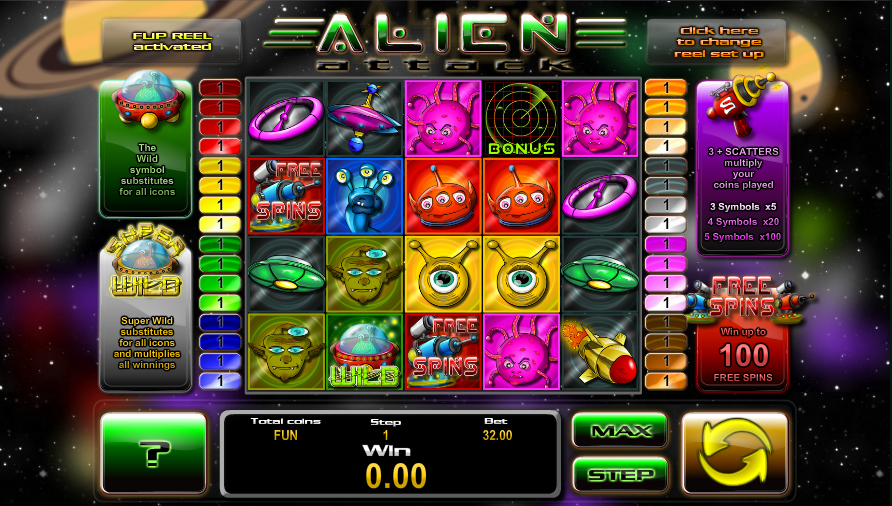 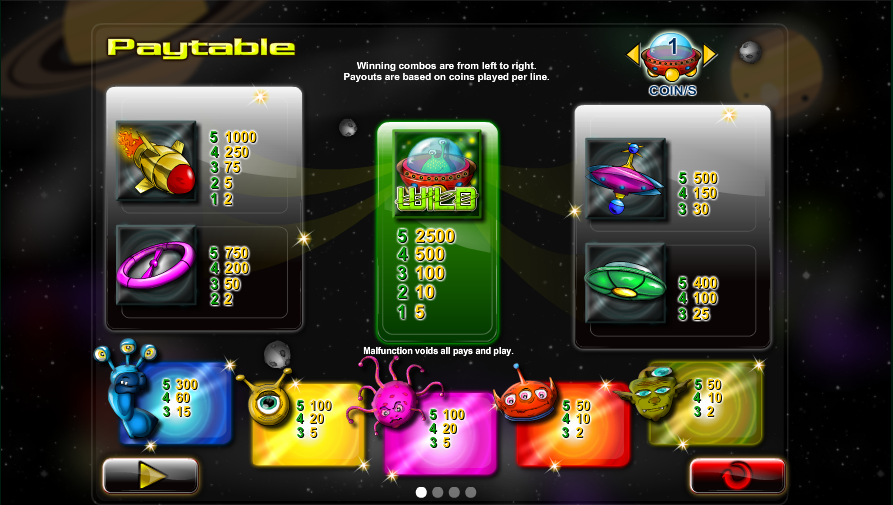 As we know from decades of alien invasion movies, the human race is under constant threat of destruction and slavery from a unending stream of hostile extra terrestrials; Alien Attack is an online slot machine from Espresso Games which continues that narrative while also offering various bonus features and enhanced wild symbols.

Alien Attack is a five reel slot with three rows and thirty two fixed paylines; as you can see from the screenshot above there’s plenty happening on the screen but most of these boxes are informative rather than clickable – the exception is the ‘reel set-up’ button in the top right hand corner which swaps the reels between spinning and flipping. A star-filled view of the galaxy fills the area behind those reels.

All the symbols are related to the theme and include a rocket, three space craft of different colours and then five aliens of different hues – blue, yellow, pink, red and green.

A little green alien in a spaceship is the wild symbol which replaces all others in a winning combo except for the Super Wild, the ray gun scatter, the radar bonus and the Free Spins icon.

This is an enhanced wild symbol which will substitute for everything the normal wild does but including that wild also; it will also multiply and winnings by 3x.

This is triggered by landing three of the Free Spins icons anywhere on reels one, two and three; the free spins will now begin and you will see two laser guns facing each other above the reels. When a blue laser appears on reel one it will fire at the red laser, damaging it and awarding a win multiplier for any wins on that spin; when a red laser lands on reel five it will shoot your (blue) laser.

The round is over when either laser is destroyed or you’ve had 100 spins.

Trigger this by landing three of the radar bonus icons anywhere on reels three, four and five; this is a picking game which involves selecting spaceships to collect multipliers which are then applied to your bet.

Alien Attack is an unusual and action-packed slot with plenty of extra features to keep things interesting; it seems fairly easy to trigger those features so why not give it a go?