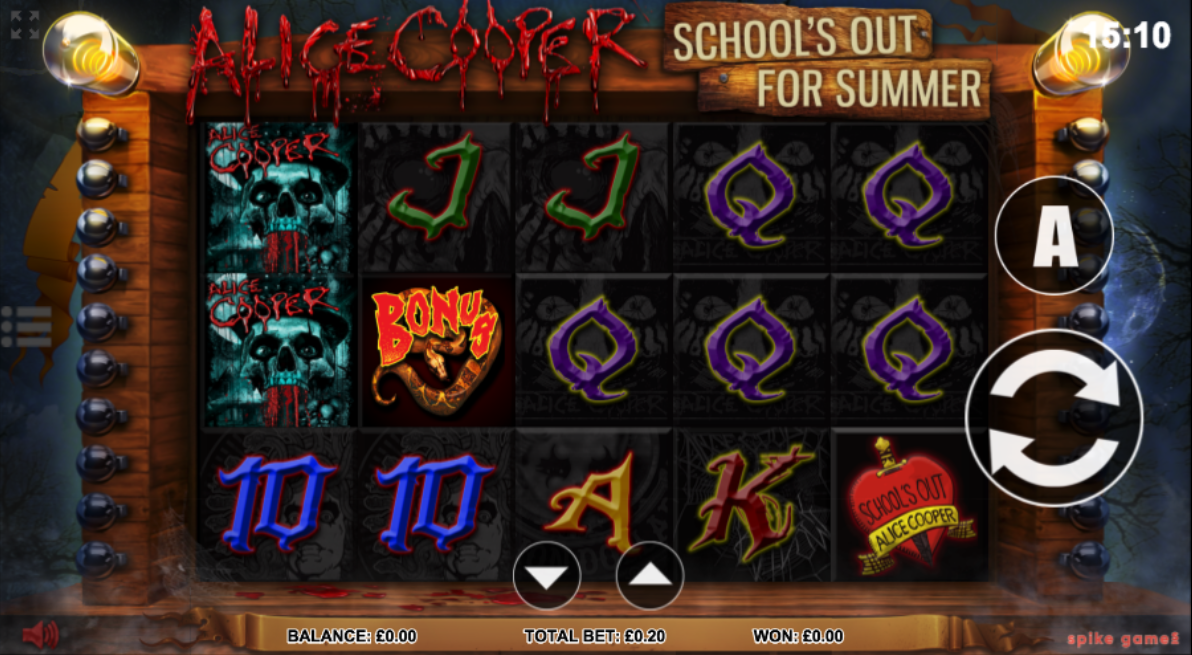 Now in his 8th decade, Alice Cooper (aka Vincent Damon Furnier) is showing only a few signs of slowing down as he approaches maturity and it’s certainly about time for an online slot dedicated to the great rocker; in this case it’s Alice Cooper – School’s Out For Summer which showcases the famous song along with several bonus features; it’s developed by Spike Games and you can read all about it below.

Alice Cooper – School’s Out For Summer is a five reel slot with three rows, twenty fixed paylines and of course the song from the title blaring away in the background. the reels spin within a wooden structure against a backdrop of spooky goings-on behind.

There are just two high value symbols – Alice Cooper and an album cover – along with 10, J, Q, K and A.

Cooper’s eyes are wild and they appear only on reels two and four with a feature attached; there are two bonus symbols including the snake and the pierced heart.

The Twin Wilds will appear randomly on reels two and four and they will trigger a random number of free spins with those reels completely wild.

This is triggered by landing three or more of the snake bonus symbols anywhere in view and first you will get to play a ladder gamble to try and increase the initial number awarded; you’ll get three lives to do this and when all lives are lost the spins will begin.

Trigger this by landing five of the pierced heart symbols on an active payline and you will get to pick from one of the switches on display – this will be worth a cash prize.

Alice Cooper is a really atmospheric slot which is only enhanced by the original song accompanying your gameplay; the features are well thought out, the graphics look great and there’s an RTP of 96.88%.