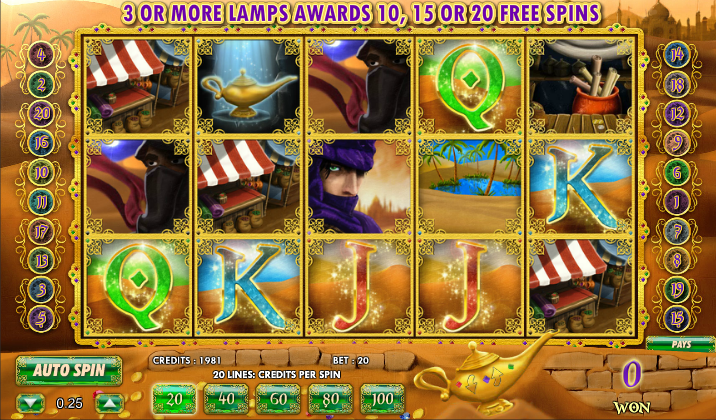 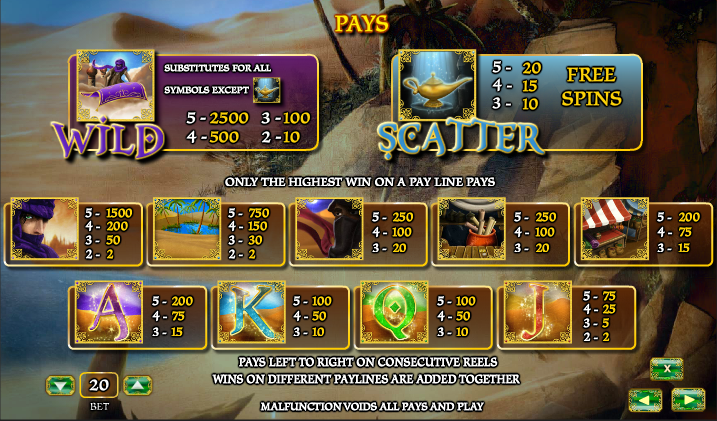 Middle Eastern legends and tales make a fine theme for any online slot and when the mysterious figure of Aladdin makes an appearance also, well so much the better. Aladdin’s Legacy is a good looking release from Amaya Gaming with a nice soundtrack and more creativity than usual when it comes to the bonus features. Read on to find out more about this game.

Aladdin’s Legacy plays out over five reels and twenty paylines. The backdrop to the reels is a desert landscape with palm trees and minarets just about visible in the distance. The reels themselves are set in an ornate golden frame which suits the theme perfectly.

A sparkling set of playing card icons make up the lower value symbols but there are various theme-related pictures for the higher value ones. They include a market stall, scrolls in a vase, a veiled woman, an oasis and Aladdin himself.

The famous lamp is the scatter symbol which activates the main feature and there’s a magic carpet wild which also pays out the biggest base game prize of 2500x your line stake for five on a payline.

There are several parts to this feature but first of all you have to trigger the free spins and that’s done by landing three, four or five of the lamp symbols anywhere on the reels. That will give you ten, fifteen or twenty spins respectively.

The spins all take place on a set of reels in which the symbols are all coloured gems but there’s also a cave icon which can appear on reel five and if it does you will kick off the second extra part of this feature as follows.

Into The Cave Bonus

If you manage to land that cave icon on reel five, you will get the chance to try and work your way into the cave by picking the correct three gems to open the door. You can see this process in the video below. If you fail you will return to complete your free spins but if you are successful the nest part begins – the Treasure Room Bonus.

Now your task is to make the correct decision to work your way along a path towards the treasure. It’s tough to make it to the end but if you do you’ll win the big prize. Fail and you will head back to the free spins.

The feature is triggered by the scatter symbols so you can play with as many or as few paylines as you like and still have the same chance of getting the free spins.

There’s not much to dislike about this slot – it looks and sounds good and it’s got a bonus game which is a genuine diversion from the base game. It’s well worth checking out.