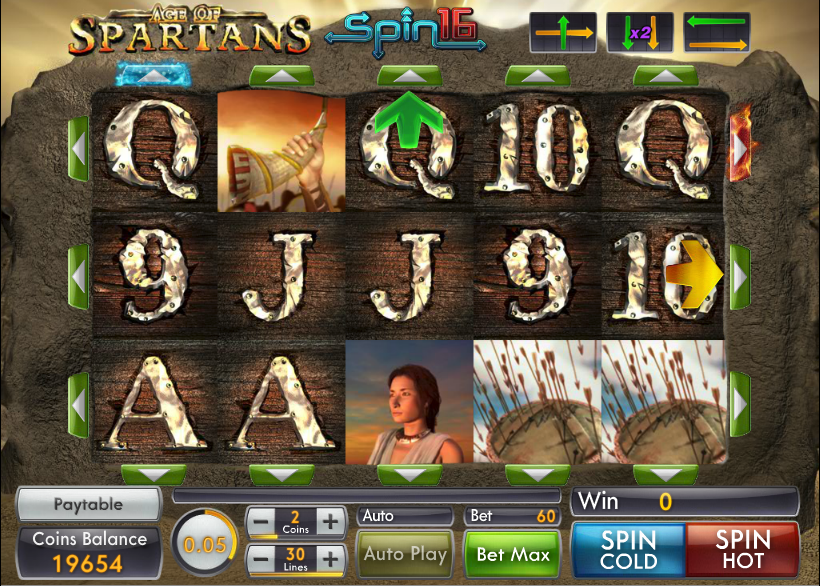 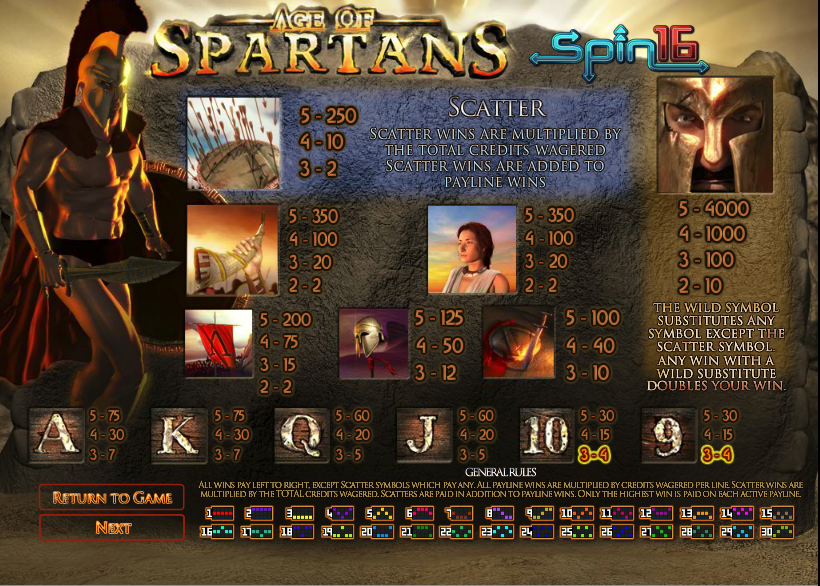 King Leonidas and his army of 300 soldiers have a lot to answer for – not just in terms of a heroic battle against overwhelming numbers of Persians but also as a surprisingly regular theme of online slot machines some 2500 years later. This one’s called Age of Spartans, it’s developed by Genii and it features their Spin 16 game mechanic.

Age of Spartans Spin 16 is a five reel slot with three rows and up to thirty paylines; a large rock is the structure on which those reels spin and around the outside there are little green arrows about which we shall explain more shortly.

The higher value symbols are theme-related and include the battle horn, Leonidas’ wife, a huge red standard, a helmet and a sword/shield combo; 9, 10, J, Q, K and A represent the lower values.

Leonidas in his helmet is wild and he will replace all others to help form winning matches except for the shield studded with arrows which is the scatter symbol. Leonidas will double an wins to which he contributes.

Let’s explain the Spin 16 gameplay first – essentially this gives players the option to spin the reels in any direction they want. Just click whichever green arrow takes you fancy and the reels will all spin in that direction.

There’s also a multiplier feature here and after you’ve started the spin a big green arrow will rotate around the reels; if it lands in the correct position there’ll be a multiplier of up to 10x depending whether the match is up, down, in the right direction or both.

The ‘Spin Hot’ and ‘Spin Cold’ buttons give a clue as to which reels have been winning recently, although they are no real guide to future outcomes.

Age of Spartans Spin 16 is a slot which revolves around the reel selecting feature so if you appreciate this unusual twist then give it a go; it’s clever stuff for sure but we feel that you’ll either love it or hate it.