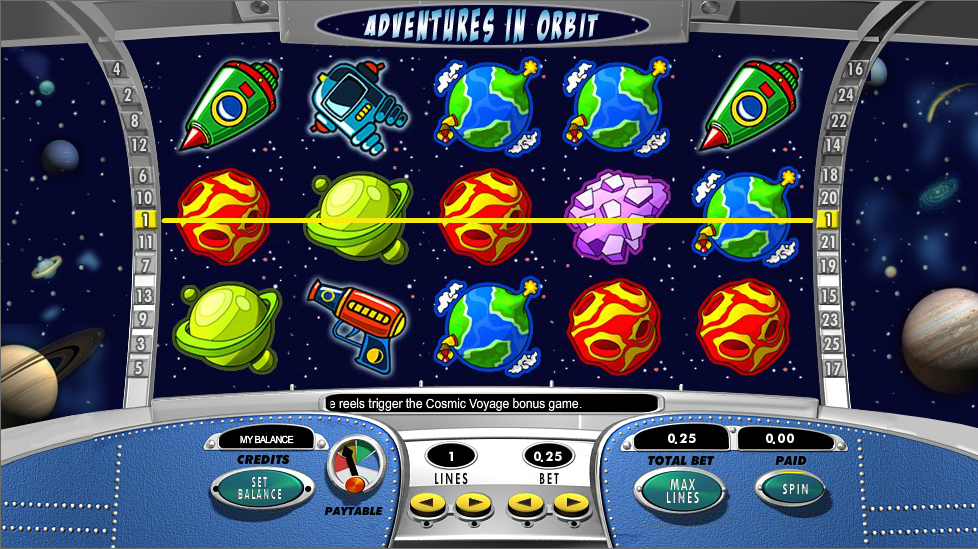 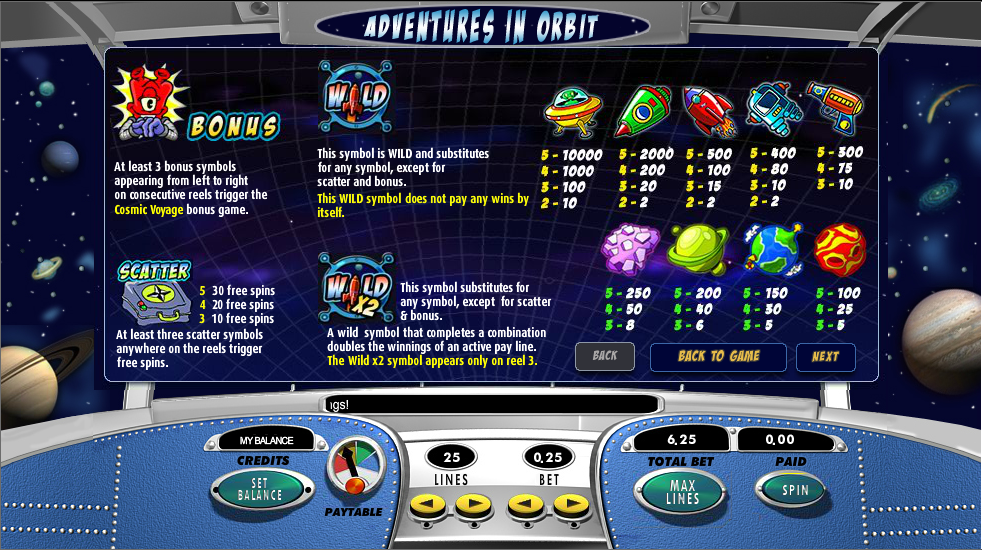 Science fiction-themed online slots are a genre we tend to see fairly regularly, whether it’s a game based on a television show or a movie, or an original sub-theme occupying it’s own space (if you’ll forgive the pun).  Adventures in Orbit from Random Logic falls into the latter category and it tells the story of a journey through the vastness of space but animated in an attractive cartoonish style.

Adventures in Orbit is a five reel and twenty five payline slot and as the player you become the pilot of a small space ship, looking out into the great vacuum.  Your screen is taken up by the symbols which are a colourful collection of space-themed items including planets, asteroids, robots, ray guns, spaceships and aliens.

There are two wild symbols – one small spaceship and another with a ‘x2’ added, an alien bonus symbols and hi-tec briefcase which is the scatter.

If you’re a fan of some good old free spins then you’ll be pleased to know that by landing three, four or five of the briefcase scatter symbols, you’ll receive ten, twenty of thirty spins respectively.

Unfortunately there’s no multiplier for any wins in this round but the spins can be re-triggered.

This slot is all about a journey through space and this feature is where you get the chance to make some progress.  You’ll need to land three or more of the alien symbols on an active payline – the more triggering symbols you land, the more the prizes in this round will be worth.

Your have six rounds to help Aoki the Alien fix his spaceship and get home again; the further you progress, the higher the prize you’ll win.  Complete your task for the big bucks but if you reveal the ‘Game Over’ symbol then you will collect your prizes and head back to the base game.

The standard wild appears only on reels two and four but there’s also a 2x wild which appears on reel three; if it contributes to a winning combination it doubles that prize amount.

It makes sense to play with as many paylines as possible because the Cosmic Voyage bonus can only be triggered on an active payline.

This slot follows the style of recent Random Logic releases but it seems to be a winning formula; some nice graphics, two bonus features and appropriate sound effects all add up to an entertaining game.