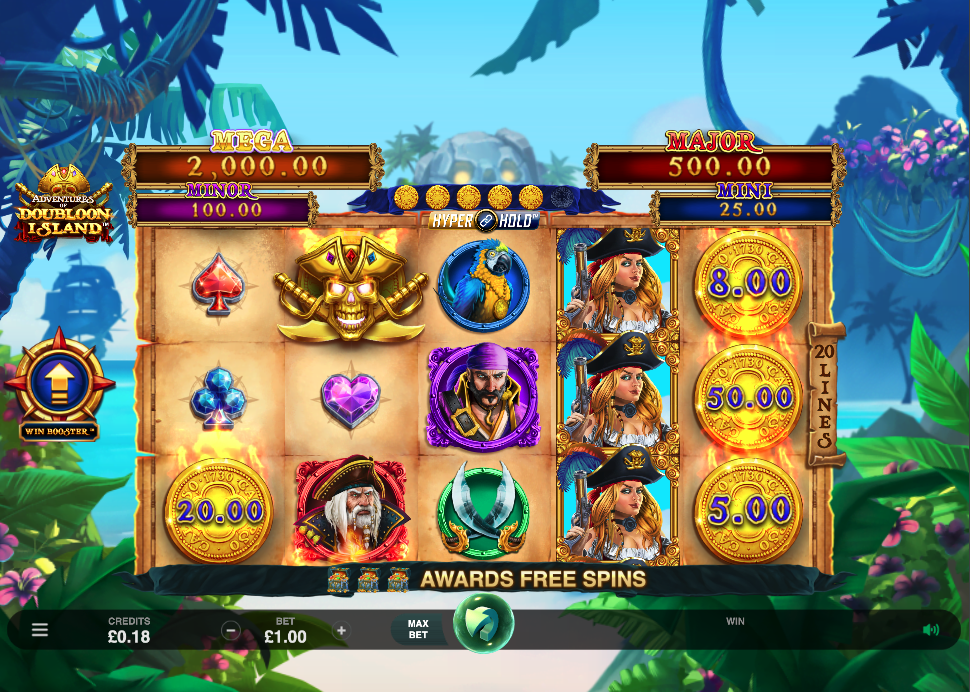 Fans of pirate-themed online slots should prepare themselves to hoist the mainsail and Roger the cabin boy as we take a loom at this release from Microgaming/Triple Edge Studios; it’s called Adventures of Doubloon Island and it promises players Hyperhold wins, jackpot prizes and free spins.

Adventures of Doubloon Island is a five reel slot with three rows and twenty fixed paylines; all the pirates action takes place inside a gigantic cave on this Caribbean island where huge piles of gold and jewels fill the space, lit by candles and faint sunlight from above.

Theme-related symbols include a couple of scary-looking pirates, a parrot and some golden cutlasses; jewels shaped like playing card symbols represent the lower values. The female pirate is wild and she can appear stacked; the treasure chest and the gold doubloon are the special symbols.

Trigger this bonus game by landing at least six of the doubloons (and their accompanying cash prize) anywhere in view and you’ll see the coin-sized spaces above the reels fill up. You’ll now receive three respins with those doubloons locked in place and any further doubloons will also lock and reset the spins to three again.

When the spins have been used up or all positions are full of doubloons the round is over and the total on those coins is yours; Skull doubloons may also land and these can award one of the jackpots. Filling all positions on the reels will win you the Mega jackpot of 2000x the stake.

Landing three, four or five of the treasure chest scatter symbols anywhere in view will award 10, 15 or 20 free spins respectively; all low value playing card symbols are removed from the reels during this round.

This is an optional extra bet which increases the stake by 50% while also increasing the jackpot and cash prize values in the Hyperhold feature; it also allows the Mega jackpot to be won by landing a Skull doubloon in that round.

It’s always worth saying that the inclusion of pirates make everything better and Adventures of Doubloon Island certainly benefits from their appearance; free spins, win boosters and the Hyperhold feature make this an entertaining visit to a dangerous age.

Adventures of Doubloon Island is a pirate-themed five reel slot with three rows and twenty paylines.

The Return To Player percentage for Diamond Blast Zone is 94.03%.

Where can I play Adventures of Doubloon Island then?