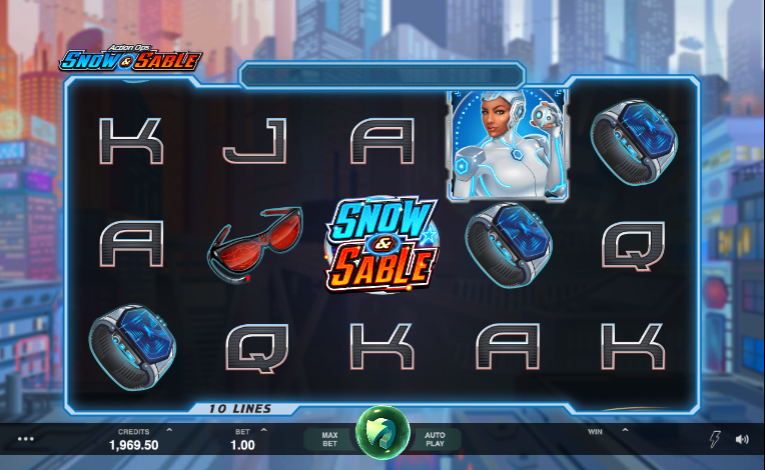 Sometime in the not-so-near future in a soulless high rise metropolis there are two agents looking to keep the residents safe from anything untoward; they are the heroes of Action Ops: Snow and Sable, this online slot from Microgaming/Triple Edge Studios in which the ladies offer free spins and wild features.

Action Ops: Snow and Sable is a five reel slot with three rows and ten fixed paylines; those futuristic reels spin against a backdrop of lofty highways and skyscrapers disappearing into the clouds.

The high value symbols include the girls’ car, a robotic ladybird, some hi-tec sunglasses and a wrist worn communicator; J, Q, K and A are the lower values.

Snow and Sable are both wild symbols and they’ll replace all others to help form winning combos except for each other and the scatter icon.

This round is triggered by landing three, four or five of the Snow and Sable scatter symbols anywhere in view for which you will receive 10, 15 or 20 free spins respectively along with the scatter payout for that combo.

During the spins reels one and five become completely wild with Snow on one and Sable on the other but they can swap positions randomly.

Hitting two or three scatter symbols during this feature will award an additional 5 or 10 free spins respectively.

Action Ops: Snow and Sable is a playable enough slot but we feel the ladies could have been put to a bit more use in the feature and perhaps the base game as well; still it’s a high octane game with a high octane soundtrack so if sci-fi is your genre, check it out.