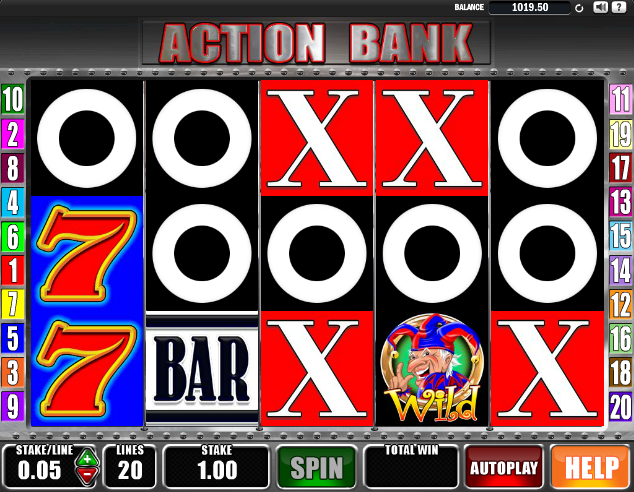 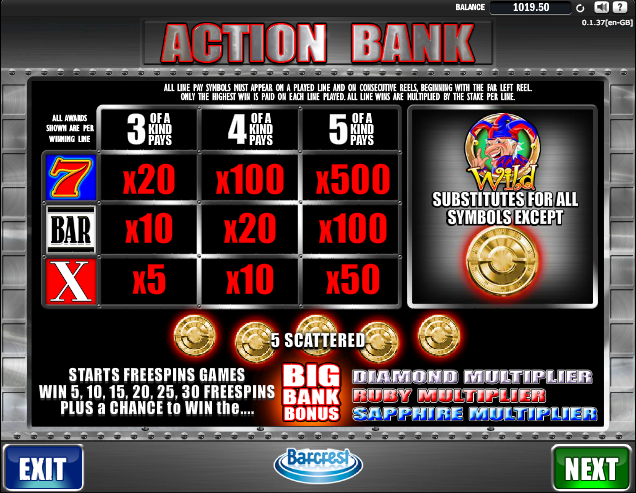 It’s a name that sounds like a slogan for a High Street financial institution but in fact Action Bank is the name of this interesting online slot from Barcrest. It certainly takes it’s inspiration from Barcrest’s bricks and mortar in terms of the symbols on show but it also includes a creative bonus feature which can prove pretty lucrative – read all about it below.

Action Bank is a five reel slot with three rows and twenty fixed paylines; it’s a basic design reminiscent of other Barcrest slots and if you’re of a certain age it will take you back to the kind of machines you used to play in the arcades.

There are just three basic symbols and these are the big red ‘7’, the ‘Bar’ and the large ‘X’; the white circle symbols win nothing but they can help trigger the feature (more info below).

The joker is the wild symbol and he will substitute for all others except the golden vault – that’s the scatter icon which activates the main feature.

The white circles have a chance of transforming into the golden vault symbols and if you can land five of these on the same spin, this feature will be triggered.

You will now be asked to select one of those vaults which will award between 5 and 30 free spins. Before they start you also have the chance to play a gamble round to try and increase the number of spins (max 30) but you can also lose them.

The spins will now take place with some double symbols added to the reels – these enable longer paylines and bigger wins. The spins can be re-triggered by landing five more scattered vaults during this round.

In addition it’s also possible to randomly activate the Big Bank bonus now and this is a picking round which offers three multipliers – diamond, ruby and sapphire – up to 500x.

Action Bank is good fun and it combines some traditional looks with some up-to-date features which can prove profitable with a bit of luck. Give it a go – it has an RTP of 95.16%.