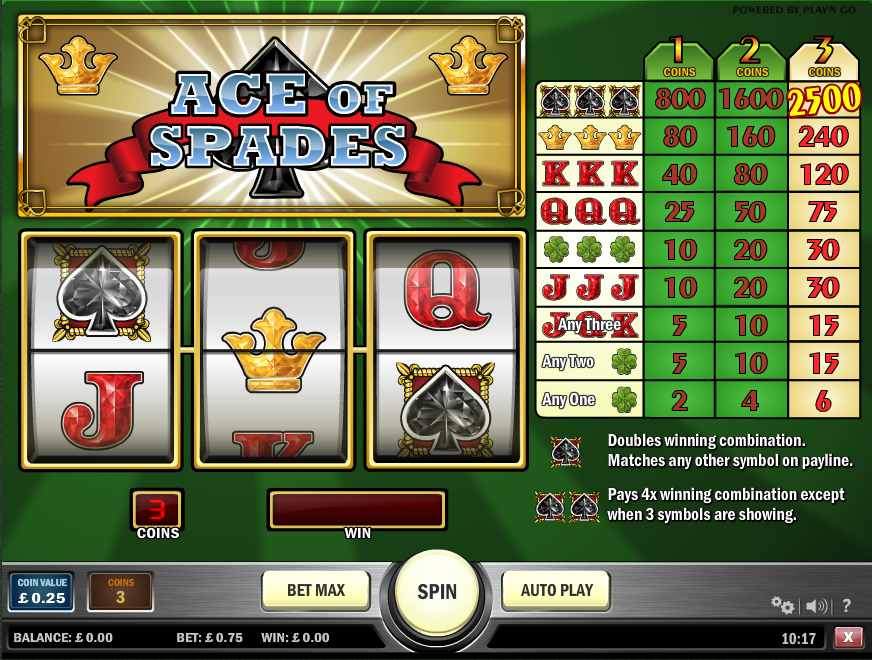 It could be argued that the best things in life are the simpler ones – a blue sky, a snowflake or a sandy beach perhaps – but sometimes we also like the complexity of technology and the excitement of variety; Ace of Spades is an online slot machine from Play N Go which falls into the former category with it’s basic gameplay and featureless action – read on to find out how it all works.

Ace of Spades is a three reel slot with just one payline and its design will almost certainly take you back to those amusement arcades in whichever coastal town took your fancy. The mechanical sounds of a traditional slot accompany your gameplay to add to the authenticity.

The symbols are a familiar mixture and include the ace of spades, golden crowns, four leaf clovers, J, Q and K.

While there are no real bonus features there are some extras associated with several of the symbols:

That’s all there is to Ace of Spades but it’s worth mentioning that there are three coin levels to choose from when betting and the maximum payout when using the three coin option is relatively higher than the one or two coin options. This effectively increases the RTP to 95.94% from 95.87%.

Ace of Spades does what it says on the tin but that’s just fine if a classic slot is what you’re looking for; play with three coins of your budget will allow.