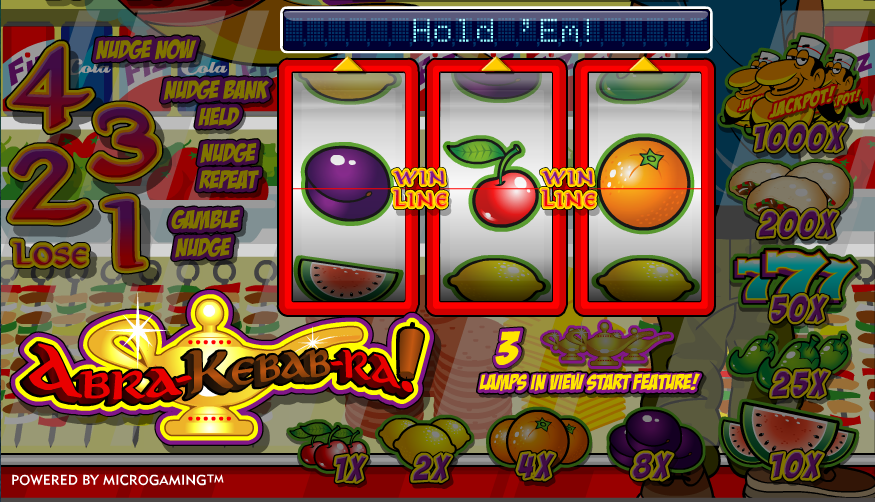 If the title of an online slot includes certain words then you know it’s target market is British players; ‘Kebab’ is one of those words – the ideal accompaniment to a traditional evening out at the pub and now shoehorned into Abra-Kebab-Ra, a fruit machine-style game from Microgaming.

Abra-Kebab-Ra is a three reel and single payline slot with the combined themes of the aforementioned kebab and the genie’s lamp. Traditional fruity symbol make up the lower value symbols but higher up the value ladder there’s some peppers, sevens and a tasty-looking kebab. If three’s such a thing as a kebab chef/genie, he’s the most valuable symbol worth 1000x your stake.

You will notice small magic lamps attached to some of the symbols on the reels and if you can land three of these in view (not on the payline), the feature will begin.

You can see it play out in the video below but essentially you are given the choice three Hi/Lo gambles on each turn to try and work you way up the respective bonus ladders – multipliers, features or nudges. On every third correct guess you will receive a bonus which can be used to extend you time in the feature.

When you think you’ve pushed your guessing luck as far as it will go, click collect to grab the prize you want, remembering that you may have progressed further up one ladder than another.

Nudges allow the player to jog single reels down to try and make winning combos or to collect lamp symbols. They are awarded randomly and can also be repeated, gambled or held.

If you see this written in the sign above the reels it means the machine will respin for you for a guaranteed win.

If this is written in the sign, don’t be tempted to use the holds offered, just press ‘Spin’ for a certain win.

You can deploy plenty of strategy using the nudges and hold to try and collect the lamps and reach the feature. Once you’ve made it there, it’s fairly easy to progress quite far by playing sensible and using the bonuses offered. Don’t push your luck too far though because the odds will always get you in the end.

We make no secret of the fact that we’re fans of this type of game; the features are relatively to access and good fun. Nudges and holds also make us feel like we’re in the pub.