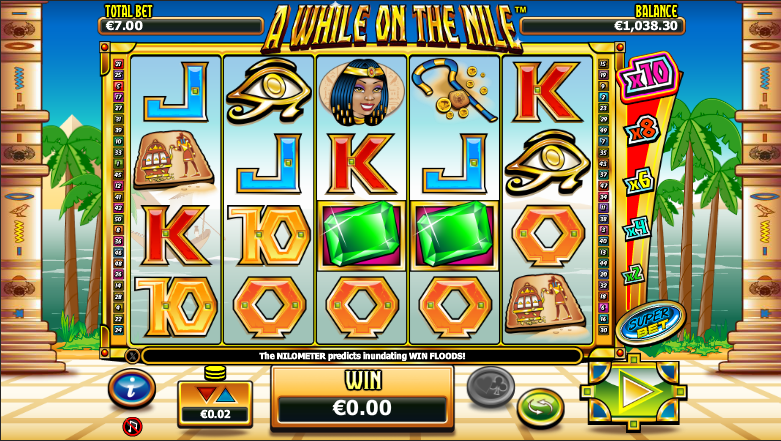 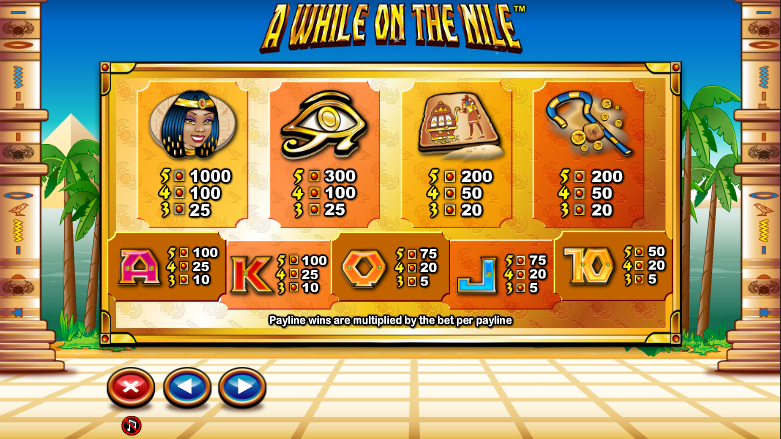 There’s no shortage of Egyptian-themed online slots but of course there’s always room for one more; A While On The Nile is a game developed by NextGen Gaming which differs from the usual Egyptian fare of pyramids and sphinxes and provides us with a view over the River Nile. Read all about the game and it’s bonus features below.

A While On The Nile is a five reel slot with four rows and fifty fixed paylines; as we mentioned above the backdrop to the reels is the legendary River Nile with boats bobbing along beyond the palm trees. Hieroglyph-covered columns frame the reels which are set inside a gold rim.

There are four high value symbols including Cleopatra, the Eye Of Horus, a stone tablet and the Pharaoh’s staff; 10, J, Q, K and A are the lower values.

This gives players the ability to increase the bet per spin while also increasing the win multiplier – the extra multiplier is worth up to 10x but there are various levels in-between:

Landing three of the scarab scatter symbols will trigger this feature and it’s a prize picking affair so all you have to do is pick from the scarabs displayed to win cash awards until you find the ‘Collect’ one, at which point the round is over.

This is triggered by landing three of the jewel scatter symbols anywhere on reels two, three and four; you will receive five free spins during which random symbols and stacks of symbol can be turned wild. More spins can be re-triggered and you will also play this round at the Superbet level you’ve chosen, if any.

Wager your most recent win by clicking the Hearts/Clubs button below the reels; now try to double or quadruple that win by guessing the outcome of the turn of a playing card.

A While On The Nile is a basic slot but not a bad time-waster; it adds something a little different to the Egyptian genre and it includes several extra bonus features, although none particularly creative. It’s RTP ranges from 95.01% to 96.60%.