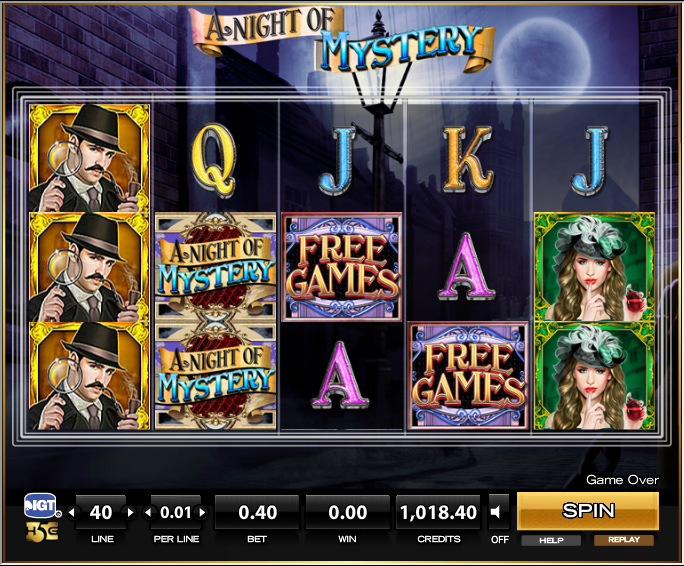 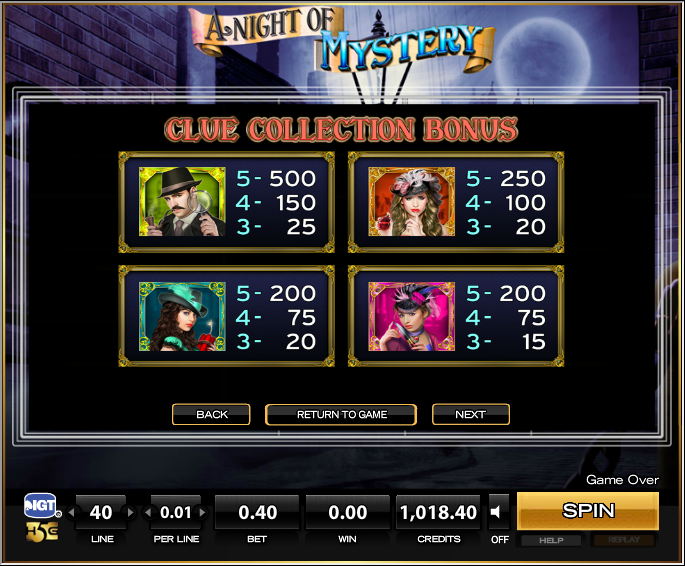 Victorian London is the setting for this crime-themed online slot from IGT; it’s called A Night Of Mystery and it seems to be influenced by tales of Sherlock Holmes, Jack the Ripper and the like. It looks good and it features an extremely complicated free spins round so read the full review below for all the essential information.

A Night Of Mystery is a five reel slot with three rows and up to forty paylines; the backdrop to the reels is a gloomy city alleyway barely lit by a distant full moon and a fog-shrouded gas lamp.

The high value symbols are four threatening-looking ladies and a pipe-smoking chap with a magnifying glass; lower values are the standard 10, J, Q, K and A. The character symbols appear stacked on the reels.

This is where things get complicated but it starts simply enough and is triggered by landing three of the Free Games symbols anywhere on reels two, three and four. You are now awarded nine free spins on a set of reels which include eight extra symbols – all clues:

Each clue you collect is turned into a wild symbol for the duration of the spins; additionally each pair of clues collected (e.g. Red Ink + Lipstick) is associated with a character who will will also turn wild. If that’s not enough collecting a pair will award three extra free spins. Each of these special wilds appears only on certain reels.

Hopefully that all makes sense!

A Night Of Mystery offers eom decent base game wins because of the stacked symbols in play but most of the money-making action takes place in the free spins round which is interesting stuff if you can trigger it. There’s an RTP of 94.90%.