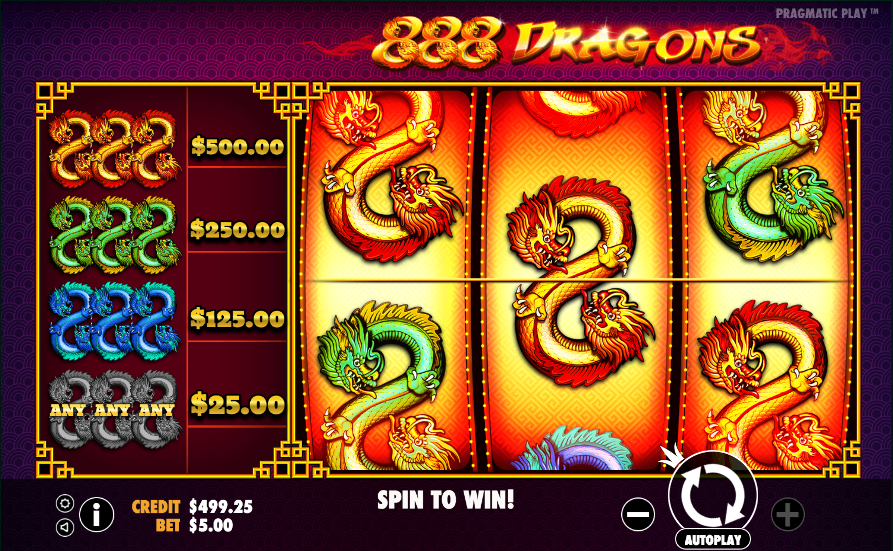 Simplicity can of course be a virtue in all aspects of life and the world of online slot machines is no exception; we may like five reel games which sing, dance and offer numerous bonus features but we also appreciate the appeal of a game such as 888 Dragons. It’s developed by Pragmatic Play and it’s a stripped down version of 8 Dragons, a five reeler with a few more bells and whistles.

888 Dragons is a three reel slot with three rows and just the single payline; the oriental theme is evident here with Chinese characters inscribed above those reels which are bordered by a lim golden frame with geometric patterns. To the left of the reels is the paytable which gives away the fact that this is a fairly simple game.

Interestingly, if you’ve already played 8 Dragons then you’ll know that these dragon symbols are the stacked wilds from that game – we digress but a bit of cross-game continuity is always welcome.

That’s really all there is to 888 Dragons so just set your stake level from £0.01 to £5.00 and spin the reels; it’s a high variance game so you’ll win bigger amounts but less often and it comes with a solid RTP of 96.84% which is slightly higher than its five reel relative. If you like three reel slots then this should be ideal.