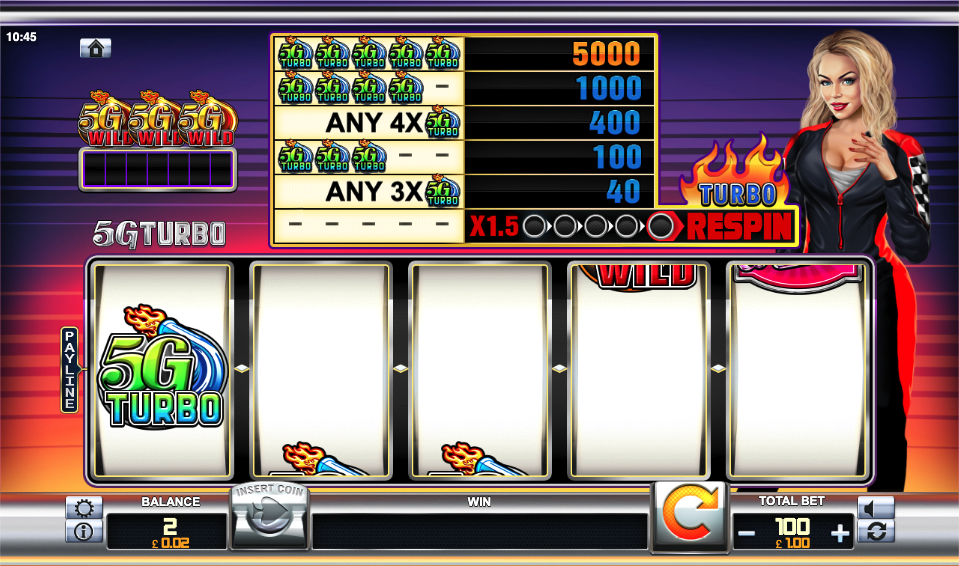 Back in the 1990s we quite fancied a car called a Renault 5 GT Turbo and at first glance this online slot from Leander Games looked as if it may be themed on that hot hatch; closer inspection of 5G Turbo meant that turned out to be incorrect but it is still car related and it comes with free spins, nudges and a light bulb feature.

5G Turbo is a five reel slot with one row and one fixed payline; it’s quite a basic, old-school design with the addition of a blonde girl in racing gear on the right hand side.

There’s only one standard symbol and that’s the 5G Turbo; the golden 5G Turbo is wild and the special symbols are the bonus, free spins and pick and win icons.

If there’s a wild symbol in view but not on the payline it will nudged onto it to help you out; in addition landing three wilds on reels two, three and four will pay a prize of between 2x and 50 the total bet.

Landing five blanks on the payline will multiply any wins on the next spin by 1.5x; one light bulb above the reels will also be lit and when all five are switched on you’ll receive the Turbo Respin which is free and increases the potential prizes by 50%.

This is triggered by landing the bonus symbol on reel one and either the 10 free spins/2x multiplier or 5 free spins/3x multiplier on reel five; the spins can’t be retriggered but they are played with 50% higher prizes.

Trigger this by landing the bonus symbol on reel one and the pick & win symbol on reel five; you’ll now get to pick from the helmets available for a cash prize of 3x the total bet. If the next helmet turns out to be the same colour your prize will be doubled otherwise the round is over.

5G Turbo may not be a superfast Renault but it squeezes plenty of bonus features into a simple interface; if you enjoy some retro gameplay with some clever diversions then this is the game for you.