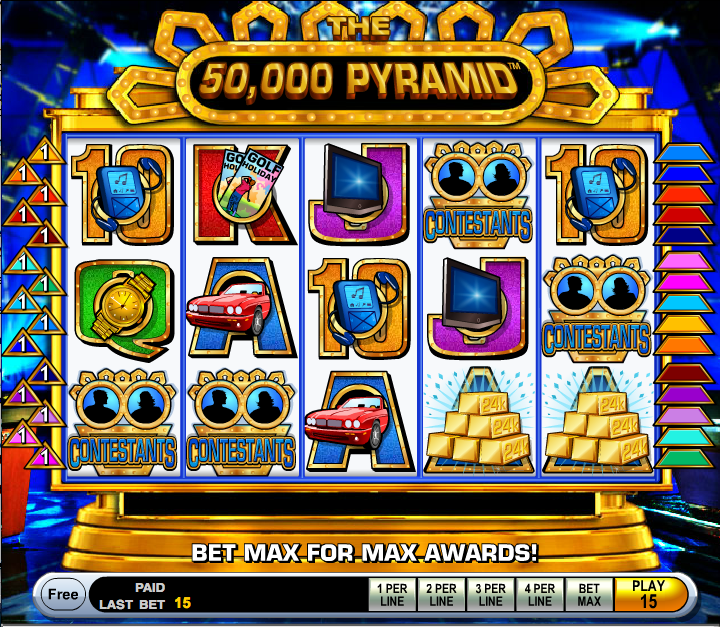 If you’re based in the United Kingdom and you’ve never heard of a television show called Pyramid than that’s because it was never shown here; in fact it was a US-only production in which contestants would try and guess what their team mates were talking about in order to win prizes.  The 50,000 Pyramid online slot from IGT is not entirely faithful to the television show but it does contain a pyramid.

The 50,000 Pyramid slot has five reels and just fifteen paylines; it’s certainly set in some sort of brightly-lit TV studio and most of the symbols are the type of aspirational goods we’d all like to win – am MP3 player, a big telly, a gold watch, a car and the like.  There’s also a celebrity star symbol, a contestants symbols, some gold bars and a big red seven.

The game’s logo is the wild symbol which is also worth the maximum jackpot of 50,000 your line bet; the scatter symbol is the Winner’s Circle icon.

This is the only bonus game in this slot but it’s contains a little more variety than the usual fare;  you need to land three, four or five of the scatter symbols anywhere on the reels in the base game and you’ll play the Pyramid.

The idea is to pick blocks from the bottom of the pyramid working your way up; each successful pick will reveal more free spins (you start with two) or an extra multiplier.  Hopefully you will also pick blocks containing extra picks or upward arrows which take you to the next level.

If you trigger this game with four or five scatters, the pyramid will contain more extra picks and ‘up’ arrows.

When you’ve run out of picks the free spins will begin and your prize will be calculated.

To win the biggest prize you’ll need to be playing the max bet as shown below the reels – it will be worth it if those five wilds come in for you.

There are better game show-themed slots than this but it’s worth a go – the music is energetic and the bonus feature is fun and it should keep you busy for a while.